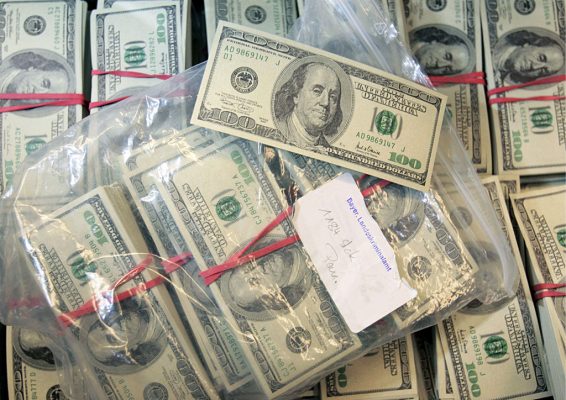 The Economic and Financial Crime Commission (EFCC) has swung into action ahead of the Saturday Presidential election, hunting for influential and powerful politicians that were believed to have resorted to ferrying hard currencies through Nigeria’s numerous porous borders to compromise election.

The Commission is said to have deployed its operatives to lay ambush for such slush cash and promptly arrest the couriers.
According to information reaching us at Greenberge Reporters,  the anti-graft agency has moved its crack operatives to key border towns in Nigeria in order to apprehend the cash couriers following credible information that daring politicians had resorted to using land borders to ferry in millions of hard currency for vote-buying having been blocked through the banking system and Bureau de Change (BDC).

It was learnt that a crack team raised by the EFCC to frisk BDC dealers and outlets in Kano, Sokoto, Jigawa, Taraba, Borno, Bauchi, Lagos and Cross River states had already moved into the affected states and are currently mixing freely with the dealers with a view to picking the couriers for prosecution against money laundering.

It was further gathered that the anti-graft agency was also trailing those who had ferried fake U.S Dollars across Nigeria’s borders in order to hoodwink and lure unsuspecting Nigerian voters to vote for a particular candidate because of the huge sums promised them.

“The tragedy of the situation is that the so-called hard currency is fake and we are trailing those who ferried it into the country with a view to bringing them to justice,” an EFCC top official, said.

“These people, who are also into some form of magic, are believed to have used some form of spell to deceive their victims to accept the hard currency as original and vote for a preferred candidate but they would only come to their senses after the elections.

“We have laid out our men to fish for the perpetrators of this unholy and devilish act with a view to apprehending and bringing them to account for their inhuman activities,” the official said. It will be recalled that the acting EFCC Chairman, Ibrahim Magu, had earlier in the day raised the alarm over the circulation of fake Dollars in the country just days to the presidential poll and appealed to Nigerians to be on the watch out in order not to be taken in. In a statement personally signed by the Acting Chairman of the Commission,  Mr Ibrahim Magu, the agency stated that the warning followed intelligence gathered in the build up to the elections.

“The intelligence indicates that the Dollar notes have features of genuineness, but forensic analysis by the Commission reveals otherwise. “We therefore warn the BDC operators to be cautious in their transactions from now till the end of the elections,” EFCC source said.

None Inclusion Of MRDD In Ballot Paper: Court Halts INEC In Adamawa