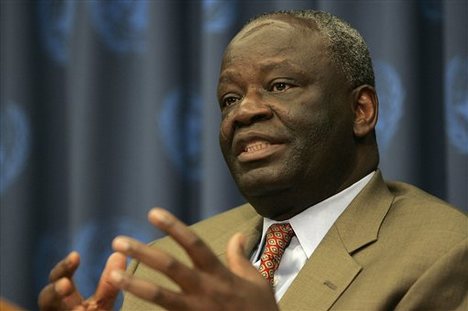 Professor Ibrahim Gambari, Chief of Staff to President Muhammadu Buhari, has been conferred with the traditional title of Zanna Yawu Dima of Lafian Bare-Bari in Lafia, capital of Nasarawa State. The meaning of the title is “Defender of the Dynasty.”
Professor Gambari is a potential Emir of Ilorin, having belonged to one of the ruling Houses.
Speaking during the conferment of the title by Alhaji Sidi Bage Muhammad, the Emir of Lafia, Professor Gambari, who was on two-day working visit to Nasarawa State, called on Nigerians to embrace one another and work in unity for the success and development of the country.
He said that this will build an inclusive and cohesive society where everyone will be happy, safe and proud to have a country Nigeria.
He advised Nigerians to give priority to the unity and peace of the country, even as he called on leaders to work assiduously toward unity and tolerance among ethnic groups in the country.
He pleaded with Nigerians to continue to give maximum support to President Muhammad Buhari, saying that his success is everyone’s success.
The Chief of staff, who had earlier visited the Agricultural Machinery and Equipment Development Institute (AMEDI) Lafia, said that the building is a symbol of seriousness of the federal government’s commitment to the development of agricultural across the country.
He expressed confidence that AMEDI in Lafia, which was built by NASENI, will in no time emerge as a centre of excellence in agricultural machinery and equipment design to enable Nigeria to scale new heights for agricultural produce and a Hub for Agro-allied technologies.
“It is a pleasure for me to be here physically, groundbreaking ceremony which was done on August. I am proud to be associated with the tremendous progress that has been made since that time. By God grace, before the end of this administration, this will be commissioned and it will increase the level of agricultural produce and food value chain in the country.”
Professor Gambari appreciated the executive vice chairman of NASENI, Professor Mohammed Sani Haruna for the wonderful work he has been doing across the country.
He expressed happiness over the warm reception accorded him by the Nasarawa state government and applauded governor Abdullahi Sule over his various achievements in the state.
The NASENI Executive Vice Chairman, Professor Mohammed Sani Haruna appreciated Gambari for the visit and the support he has been giving to NASENI.