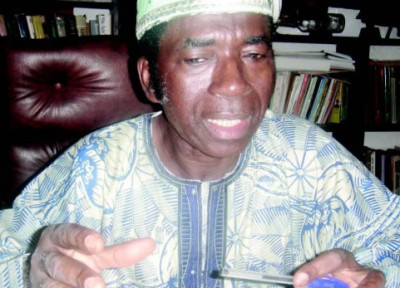 Former Nigeria Minister of Education and presently the Deputy Director General of the Peoples Democratic Party (PDP) Presidential Campaign Organisation, Professor, Tunde Adeniran, has said that PDP is ready to partner professional online journalists and publishers to enhance the re-election campaign of President Goodluck Jonathan and for the development of the nation.
Adeniran said this when he played host to members of the Guild of Corporate Online Publishers (GOCOP) in Abuja.
He described journalism as an impactful profession, adding that with the development of the online media, the expectation of the society from journalists has gone higher.
He said that in reaching out to Nigerians, both within and outside the country, the online media has become a critical factor.
He said the patriotic duty before the PDP requires that the party works with the online publishers in the bid to disseminate what the administration of President Jonathan has achieved.
Adeniran said that contrary to what the opposition had been disseminating, the administration of President Jonathan has performed creditably in all sectors.
According to him, what is required now is for Jonathan to be given the second term mandate to build on his achievements.
“Having gone through what we have gone through as a nation, what are the choices?
“We need to make the choices. We cannot afford not to be conscious of two things: this country belongs to all of us.
“We have to factor our various tendencies into all we do so we do not create more problems.
“You do not solve a problem by creating the ground for future battles. That is why people question the handling of issues by the President.
“It is simply because the President considers the future implications of any decision before taking it.”
Professor Adeniran said that the online media has a critical role to play in this regard, adding “the role of the online media should be to either assist or damage the move of the leader.
“And when the decision is to damage, it can be more damaging than even what external enemies will do.
“So, when we partner, it presupposes a meeting of minds.
“I have done sufficient homework to value partnership. We do not exist without having people value your contribution to the society.
“The interest of our country as partners should be paramount.”
Professor Adeniran expressed confidence that Jonathan will emerge victorious in the February 14 presidential election.
He said the President had performed exceedingly well to deserve a second term.