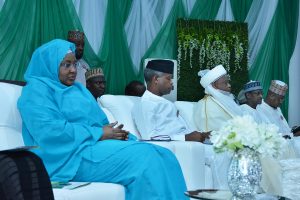 Vice President Yemi Osinbajo has observed that Nigeria is presently at the crossroad in respect of the use to which religion and ethnicity are is being played.

He said: “we are at a historic juncture in the existence of our nation. Here and there are religious and tribal tensions. Many are beating the drums of ethnic and religious superiority. Some even seek to divide the nation into ethnic zones.

“Yet, our constitution speaks in the clearest and highest terms of our national commitment to the equality of all Nigerians regardless of ethnicity, religion or status.

“It speaks of the imperative of all individuals and governments to respect the rights and dignity of every Nigerian. Our constitution speaks of freedom of worship, the liberty to belong to a faith of one’s choice and even change that faith without consequence.”

Professor Osinbajo, who spoke today, November 29 at the opening ceremony of the General Assembly of the Nigerian Supreme Council of Islamic Affairs (NSCIA), said that constitutional declarations mean nothing unless there are men and women ready to make the personal sacrifices to bridge the gap between rhetoric and constitutional ideals.

According to him, such men and women are not usually very many, but that they do not have to be many to make a difference.

The Vice president narrated a story of a leader of a large Christian congregation in a Northern State who complained to him that government  did not give national honors to those who promote the unity of the country.

“He then told me how the Governor of his State had rebuilt several churches that were damaged by religious extremists who described themselves as Muslims. I was shocked first, by the fact that here was the leader of a church, asking that the Government should honour the Governor of his State for doing something that is unprecedented.
“Yet there are States where Governors refuse to grant certificates of occupancy for the building of churches or places of religious gathering in outright violation of the constitution they swore to uphold.
“Every Sunday, my family and over 100 Christians attend service in the Chapel at the Villa. The Chapel is located in the premises of the President and his family. It is located a few seconds away from the First Lady’s kitchen. Sometimes when I see the President on a Sunday morning, he asks me whether the service is over already or I am escaping from the service! That is the sort of tolerance that we need in a multi-ethnic, multi-religious society and it is the duty of leaders to show that sort of example.
“It is the courage of leaders to live up to the ideals of their faith and their sworn commitments that invariably build nations. “Leaders must live up to the commitments to which they swear, especially political leaders.
“Nations are built by the sacrifices, the hard work of leaders who do not care even if they are condemned by persons of their own religion or ethnicity, so long as they are confident that they act in obedience to the oaths they swore and to the Almighty God.  Such men and women are few, but the profundity of their actions invariably transform communities and nations as they bend the arc of history in the direction of unity, peace and progress.”