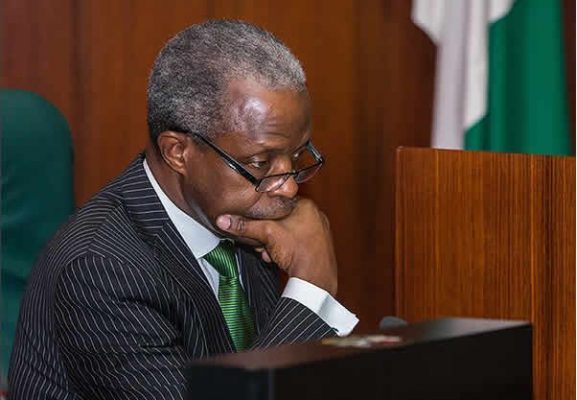 Chairman of the Federal Capital Territory (FCT) branch of the Alumni Association of the University of Lagos, Aliu Akoshile has drew the attention of Vice President Yemi Osinbajo to a situation where as retired director in the federal service is receiving N15,000 as monthly Pension.

He therefore begged the government to ensure parity or judicious harmonization of pensions payable to retired civil servants.

Aliu Akoshile, who led members of the Association on a courtesy visit to the Vice President today, April 21, said the pioneer Chairman of FCT Branch of the Alumni, 76-year-old Engr. James Bassey, is being paid N15,000 monthly pension as a retired federal Director.

The Chairman lamented the huge recurrent expenditure being incurred by universities in the country, adding that University of Lagos in particular, is spending about N85 million monthly on electricity alone whereas the fund could have been used to provide other basic infrastructures on campus.

Aliu Akoshile described Professor Osinbajo as one of the alumnus of the University of Lagos holding the highest political office as Vice President of Nigeria.

He said that members of the FCT Branch are being inspired by his sense of loyalty and impeccable record of public service, promising that they will continue to offer support where necessary to ensure that he succeeds in the onerous task of governance.

He expressed appreciation to the Vice President for granting the audience despite his very tight schedule.

Akoshile said FCT Branch is blessed with high profile members including the Speaker of the House of Representatives, Hon. Femi Gbajabiamila, five Honourable Ministers and many heads of parastatals and agencies as well as accomplished entrepreneurs in the private sector.

Responding, Professor Osinbajo asked alumni associations in the country to play significant roles in supporting the federal government in its drive for socio-economic development of the country.

See also:  Buhari Sympathizes With Parents Of Little Hanifa, Kidnapped And Killed By Her Teacher

The Vice President said that the government is planning independent power plants for some universities in Nigeria to mitigate their recurrent expenses on power consumption and free the funds for other infrastructures.

H reiterated the commitment of the federal government to reviewing the disparity in the pension being paid civil servants who retired decades ago and the recent retirees.

He said the review may lead to some forms of harmonisation that will ensure justice and equity for all retirees who have given their best services to the nation.

The Vice President congratulated the new executive committee of the branch on their election, saying that he is said he proud to be a member of the FCT Branch.