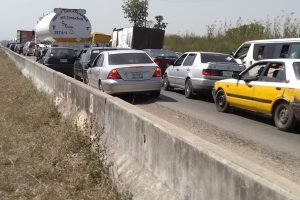 Traffic came to a standstill today, November 30 between Giri and Zuba in the Nigeria’s Federal Capital Territory as a result of diversion created by officers of the Federal Road Safety Corps (FRSC).
Our correspondent who was trapped in the holdup reported that the officers had blocked the other lane of the highway for some youths that were practicing skirting, running on the coater, wearing shoes with tyres.
He said that the vehicles, including loaded trailers,  luxury buses and others that were diverted to the other lane subsequently created confusion with vehicles coming in opposite direction.
According to our reporter, the officers who caused the confusion subsequently disappeared from the scene with the resultant holdup that built-up between Yangoji and Zuba, a distance of about two kilometers.
It was gathered that other FRSC officers later joined in reversing the situation by redirecting vehicles to their rightful lane, as the youths practicing skirting also abandoned the practice.
Our reporters said that vehicles, most of which were on long journey to Kano, Sokoto and other Northern states were in the traffic logjam for over  four hours, beginning from past 11.00 in the morning.
When contacted, some FRSC offers trying to correct the traffic confusion preferred to remain silent,  saying they were not authorized to speak to press.