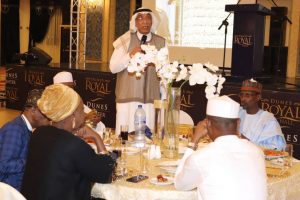 Ambassador Adnan Bostaji had earlier extended invitations to top government officials, traditional rulers, religious leaders and other notable Nigerians to the breaking of the Fast, the first that had ever been held by the Saudi Embassy in Nigeria. 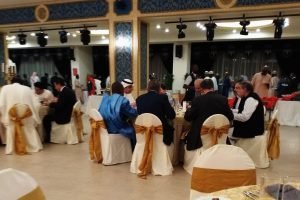 In attendance were the minister of the FCT, Malam Muhammad Musa Bello, the minister of information and culture, Alhaji Lai Mohammed, representatives of the Sultan of Sokoto, Alhaji Muhammad Sa’ad Abubakar and the senior special assistant to President Muhammadu Buhari on Diaspora, Mrs. Abike Dabiri Erewa.

Also in attendance were the chairman, and chief executive officer of the National Hajj Commission of Nigerian (NAHCON), Barrister Abdullahi Mukhtar, publisher of the defunct Democrat newspaper, Alhaji Ismaila Isa Funtua; Managing Editor (North) of The Nation newspaper, Alhaji Yusuf Ali; Editor-In-chief of Greenbarge Reporters online, Yusuf Ozi-Usman, national assembly members and other diplomatic corps as well as friends of the embassy that are not Muslims.

Addressing the guests, Ambassador Adnan Bostaji expressed gratitude for the large turnout of the embassy’s invitees even as he said that he was confidence of the unity that such gathering would foster, especially with people of mix religions in attendance.

He stressed the importance of continually developing, at any level available, the strong and cordial relation that has been existing between his country and Nigeria, one of which was the breaking of Fast with Nigerians.