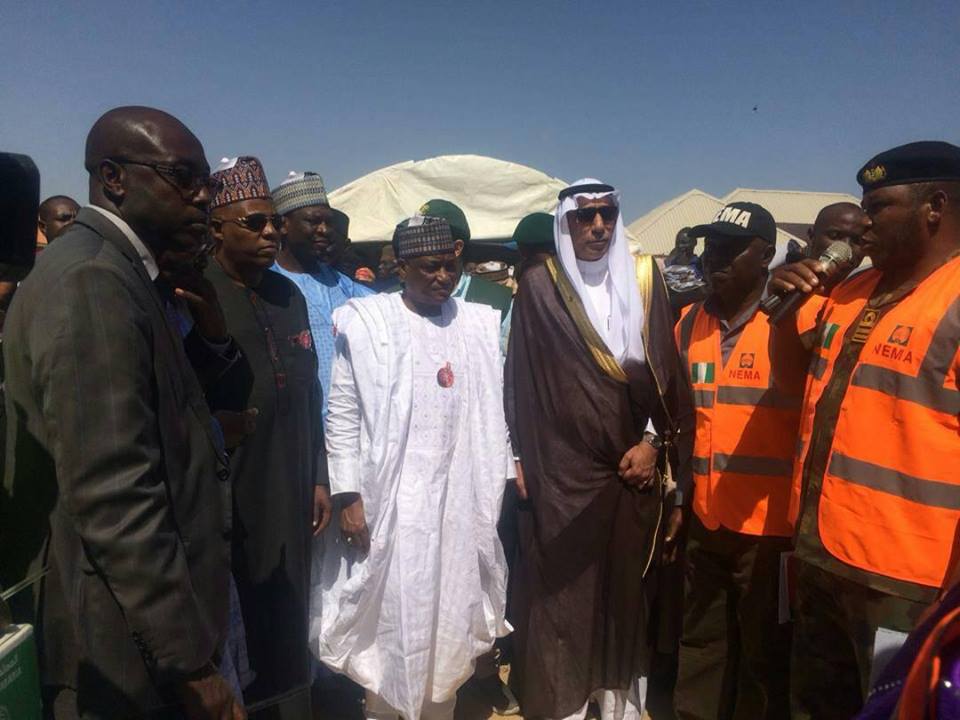 The Kingdom of Saudi Arabia, through the King Salman Humanitarian Aid and Relief Centre, has donated 140,468 bags of food items to displaced victims of Boko Haram in Borno and Yobe states.
The Director General of the National Emergency Management Agency (NEMA), Engr Mustapha Maihaja, who this  at the flag  off of distribution of the items at Teacher Village in Maiduguri, capital of Borno State, said that the food items will be distributed by the centre to 33,343 households in designated camps and communities in Borno State over the next four months.
A statement by the Head of Media and Public Relations, Sani Datti,  quoted Maihaja as commending the effort of the Minister of Defence, Retired Brigadier General Mansur Dan Ali, who facilitated food assistance to the North-East.
The statement read: “In Borno, a total of 125,372 bags of 25kg of rice and beans and 62,686 cartons of condiments with each containing 4kg semovita, two litres of vegetables oil, 29 sachets of tomatoes, 1kg of salt and two sachets of seasoning will be distributed directly through the combined efforts of NEMA, SEMA and critical stakeholders using the voucher system. Each household of six persons will get a food basket of 59.8kg for the period of one month.
“In Yobe, a total of 15,096 bags of 25kg of rice and beans with 7,548 condiments will be distributed to 3,774 households identified to benefit from the gesture, where the total food basket to be distributed was put at 225,685.”
Leader of the team, Nasser Alsubaie, an Assistant Director of Emergency Aid From King Salman Humanitarian Aid and Relief Centre, said that the generous donation would benefit more than 840,000 Internally Displaced People in the North-East, as the donation was a testimony of the humanitarian commitment of the centre.
“It will be recalled that early this year, Saudi Arabia pledged to donate the sum of $10m for capacity building to NEMA and relief assistance to the Federal Government to address the food crisis and resultant malnutrition caused by the Boko Haram insurgency in North-East.”