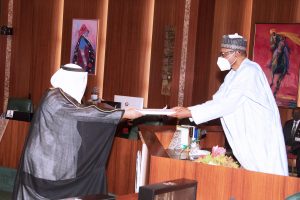 The Ambassador of the Kingdom of Saudi Arabia to Nigeria, Faisal Ebraheem Alghamdi has said that investors in various economic ventures would have flooded Nigeria if it were not the Covid-19 pandemic that overtook the world.

He said that more than 12 areas of agreements reached between President Muhammadu Buhari and leadership of Saudi Arabia when the President visited that country over a year ago, would have started yielding results if the pandemic had not set in.

Ambassador Faisal, in a chat with media men and women in Abuja today, April 1st, in Abuja Nigeria’s Federal Capital today, said that when he was appointed Ambassador, the list of what he was expected to achieve to further promote the good relationship between the two countries was handed to him.

He said that the fresh agreement covers areas like agriculture, security, oil and gas, and several others.

Ambassador Faisal said that despite the pandemic, “I’m still putting the areas of agreements in focus and keeping in touch with relevant government authorities to fulfill the mandate that was handed to me.”

The Ambassador sought the support and cooperation of the media to achieve the desire result, adding that as soon as the pandemic eases off, things would be put in place to fast track the joint development strides between the two countries.

Earlier, Head of the Embassy’s Media section, Majed Alharbi enumerated various measures being taken by the Kingdom to address the climate change and green lane vision 2030.

He said that under the programmes, 10 billion trees would be planted in the Kingdom, and 50 billion planted around the Middle East.

“This will aim at addressing environmental challenges, especially on humans.”

He said that talks had reached advance stages amongst the countries in the Middle East on the method of financing the project, which he described as “clean energy revolution.”

According to Majed, Nigeria is one of the countries that had been contacted to provide expertise and other necessities for the success of the project, even as he said that the Kingdom had undertaken to assist low income countries with the financial aspect of the project.

Majed announced that the Kingdom had launched two satellites into space as part of the comprehensive plans put forward by the Crown Prince to overhaul the system of government in the Kingdom and Middle East.