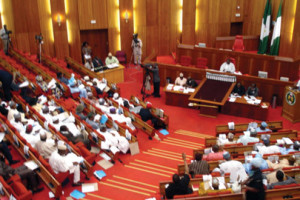 The Senate has asked the Federal Government to overhaul the National Youth Service Corps (NYSC) Scheme. It also asked the government to improve on medical facilities in all NYSC orientation camps across the country and deploy experienced medical personnel to the NYSC medical centres.

A motion of urgent public importance moved by the Chief Whip of the Senate, Olusola Adeyeye.(APC Centra) was supported by the Senate which mandated its Committee on Sports and Youth Development to conduct a thorough and comprehensive investigation into the circumstances surrounding the death of three corps members in Kano, Bayelsa and Zamfara recently.

Moving the motion, Adeyeye drew the attention of the Senate to the unfortunate death of three corps members, including Miss Ifedolapo Oladepo, from his senatorial district.

He lamented that death of corps members had become a recurrent development in the NYSC orientation camps across the country.

The Senator also expressed deep concern that experienced medical personnel were not in existence in the orientation camps, adding that inexperienced medical doctors undergoing national service were usually engaged to attend to the medical needs of corps members.

The lawmaker further expressed concern that an orientation camp that housed over 300,000 corps members could not boast of modern facilities to cater for the needs of corps members.

He decried a situation where by NYSC officials were not living up to their responsibilities, adding that the development had exposed the corps members to all manner of dangers.

“Also, Ukeme died in Zamfara Orientation Camp on Thursday, December1. We are deeply worried that the death of these corps members is becoming a recurrent decimal in almost all NYSC camps across the country.

“We are further concerned that NYSC officials are not up and doing in their official duties as they expose these Corps members to all manner of dangers.”