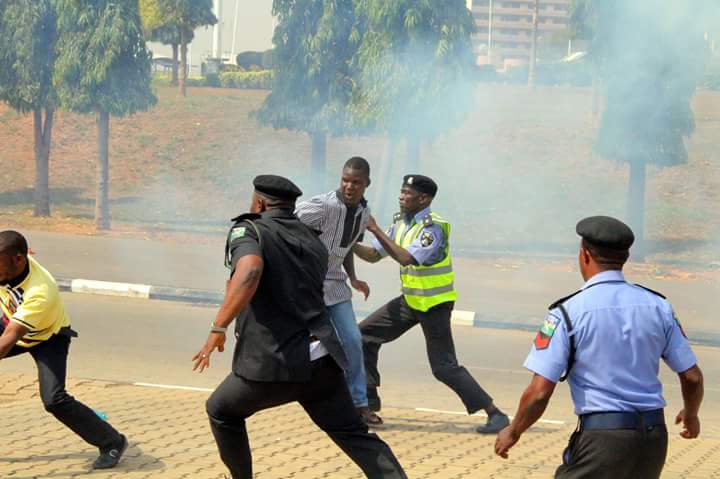 The Federal Capital Territory (FCT) Police Command has said that no fewer than 22 of its men and officers were injured by members of the El-Zakzaky Islamic Movement in Nigeria (IMN), also known as Shiites, who went on rampage in the early hours of today, Monday.

In a statement, the Police Public Relations Officer of the Command, DSP Anjuguri Manzah said that 115 members of the sect were arrested at the scene by Police operatives, adding that the joint Team of detectives from the Command in conjunction with operatives from the Inspector General of Police Monitoring Unit have commenced investigation into the incident.

Saying that the arrested suspects will be charged to court upon the conclusion of investigation, the spokesman said that items recovered from the rampaging Shiite members include catapults, iron bars, stones, ball bearings and pink head bands.
The police narrated that during the violent protest, Shiite members destroyed some government and police operational vehicles.

They were said to be attacking innocent citizens, disrupting business activities, obstructing traffic movement and smashing windscreen of innocent citizens’ vehicles in the affected areas.
The FCT Command has sounded a warning to members of Shiites movement to desist from further disrupting the peace, harmony and free flow of traffic in capital city even as it called on members of the public, particularly parents, not to allow their children or wards to be used as instrument of violence in any demonstration by any group that could jeopardize public peace and harmony.

“It is therefore imperative to state that anyone caught in the act of violent demonstration or any act capable of causing the breach of public peace will be made to face the wrath of the law.”
The command said that contrary to speculations from some sections of the media, “no life was lost in the violent protest as the Police operatives deployed to quell the protest were professional in handling the situation.”