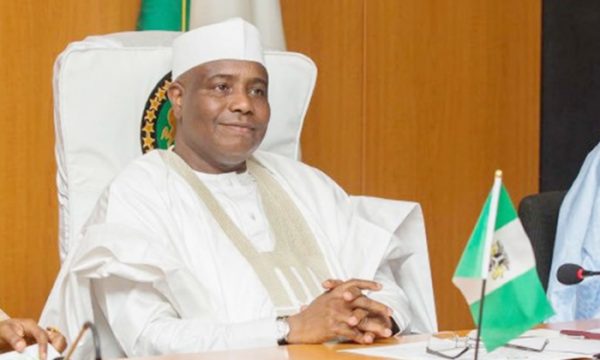 Governor Aminu Tambuwal of Sokoto State, under the umbrella of the opposition Peoples Democratic Party (PDP), has congratulated President Muhammadu Buhari on his victory at the Supreme Court on Wednesday against former Vice President Atiku Abubakar, who lost the February 23 Presidential election in the country.
In a statement today, October 31 in Sokoto by his spokesman, Malam Muhammad Bello, Governor Tambuwal advised the president to be magnanimous in his victory.
“This is a time for circumspection and rallying of Nigerians for the arduous task of tackling our huge developmental challenges.
“This is also a time to run an inclusive government and strive to forge a true Nigerian nation and spirit,” he said.
Tambuwal added that the verdict of the Supreme Court brought to a conclusion the long drawn legal battle.
“I want to specially commend Alhaji Atiku Abubakar for his doggedness, tenacity and strong belief in the judicial process.
“His stance has contributed in no small measure in advancing our democracy. He is without doubt an icon of democracy. His place in Nigeria’s democratic journey is assured.
“Therefore, I urge our party members not to be dismayed, the legal way has a terminal stage. The verdict of the Supreme Court is final, in politics you win some and lose some.
“Since our presidential candidate chose the legal way, it is a clear indication that he is not a supporter of resort to self-help, or violence, after all power comes from God and He alone gives it to whom He wishes at His own time and on His own terms.”
Source: NAN.