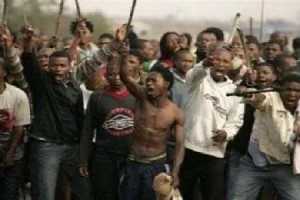 Suspected student cultists of the Government Secondary School (GSS) and Junior Secondary School (JSS) in Kuje, Abuja clashed yesterday, June 30 outside their school premises.
Eye witness accounts said that people around the two schools, which share common fence as boundary, took to their heels to escape the effect of the unruly nature of the clash.
Information had it that the students, armed with short guns, cutlasses and other dangerous weapons, inflicted injuries on one another during the clash.
It was learnt that a student cultist at the GSS had, a day before, beaten a student at JSS, leading to him losing a tooth.
The rival cultists from the two schools appointed yesterday to meet and show their strength.
It was learnt that immediately after the schools closed for the day yesterday, the rival student cultists met at the boundary of the schools to cause commotion, as residents and innocent students ran in different directions to take cover.
It was learnt that student cultists from the two schools are fond of clashing, mostly during the time examinations are being conducted.
Students of the two schools are currently sitting for promotional examinations.
As at the time of going to press, normalcy has returned to the schools, even as none of the school administrators wanted to make any comment on the incident.