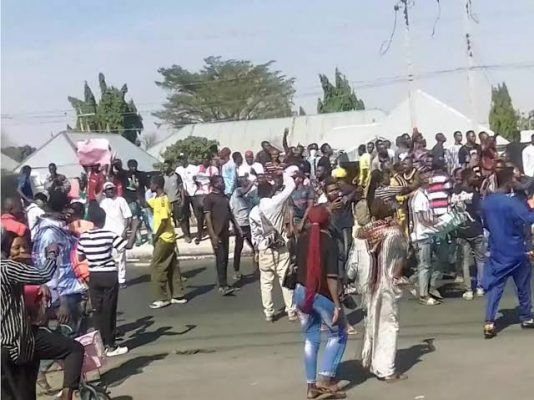 Students of Taraba State University, Jalingo have embarked on demonstration, protesting the alleged postponement of their exams and non payment of academic and non- academic staff salary for 10 months.
The protest which started at the University gate today, January 9, defied armed security personnel, as thousands of students blocked a major road leading from wukari to Jalingo, Takum, Bali roads and disrupting vehicular movements and commuter activities.
The students proceeded to burnfire with disused tyres and destroyed political party billboards. They also marched with placards and chanted anti-government songs, calling on the state government to pay the lecturers who have not been paid for 10 months now.
The protesting students were blocked at the government House by heavily armed security forces who shot tears gas canisters into the air.
Speaking to some of the student protesters who do not want their names to be mentioned, one of them said: “the government sent thugs to attack us. More than four students were injured. Police shot directly at us and sent us away without being attended to”, he said.
Staff of the institution have last week protested round the school over non payment of their salaries and threatened that “No salary, No exams.”
The university staff, led by Mr. Solomon Ishaya Audu, the NASU Chairman and Bitrus Joseph Ajibauka the SSANU Chairman, in their protest letters presented to the Vice Chancellor, Professor Sunday Bako, said that the union members were demanding payment of the outstanding salary balance of March and June 2022; Payment of the outstanding responsibility and hazard allowances for September 2021 and Payment of the 75% outstanding third party deductions.
Source: NIGERIAN NEWSLEADER Newspaper.