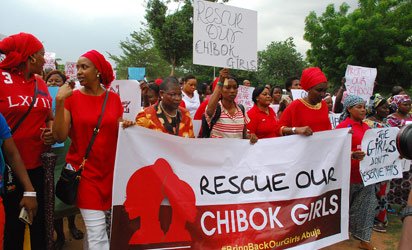 Chairman of the Chibok Community in Abuja, Mr. Hosea Abana and the Coordinator, BringBackOurGirls group, Oby Ezekwesili, have expressed optimism and strong conviction that the 219 female students of Chibok Secondary School who were abducted from their school by Boko Haram on April 14, last year are still alive, contrary to speculations that they might have been killed during military raid of the Zambisa forest.

The duo who spoke in separate interviews with journalists today when the BBOG group staged a walk round major streets of Abuja being their second day of global activities in commemoration of Chibok girls said: “as parents, we believe that our children are still alive and well. Zambisa forest is a large expanse of land that even extended as far as Bauchi so I don’t believe that the military has combed everywhere. Our daughters are still being held by their captives.”
Also, Ezekwesili said her group would never give up hope on the safe return of the girls even as she insisted that they had not been killed by the solders inside the forest.
“Our Chibok girls are somewhere on the surface of the Earth and for as long as we are a country, we have the military, we have the intelligence, we have collaboration, we have cooperation with other nations of the world, we must find our Chibok girls.
“How can our country move on without 219 citizens that can still be rescued. It just doesn’t make sense. No society grows by abandoning the citizens.
“We are not going to speculate. We refuse to speculate as to whether they are alive or dead. People want to think about the possibility of them being dead. We know we must bring back our Chibok girls, their parents are waiting, they have not lost hope. They are holding on to even a slimmer of hope that their girls would be rescued.”
“It would be exactly one year that the girls were taken. We started our countdown to the April 14 yesterday (Wednesday ) and today (Thursday ) we are working across the city to remind the people that 360 days and counting, the girls have not been rescued.
“We believe that these girls can be rescued, we believe that even beforeMay 29, our Chibok girls can be rescued.
“So during this week of global action, we have cities all over the world reminding everyone that the girls we began to call for 360 days ago, are still not back with their parents.”
She explained that tying the ribbon in strategic places across the city was a reminder to everyone that the Chibok girls were still not around.
“People want to move on but we can’t afford to move on. We must find our Chibok girls and bring them back home,” she added.
[myad]