Home NEWS There’re More Corrupt Judges That Need To Be Shown The Way Out... 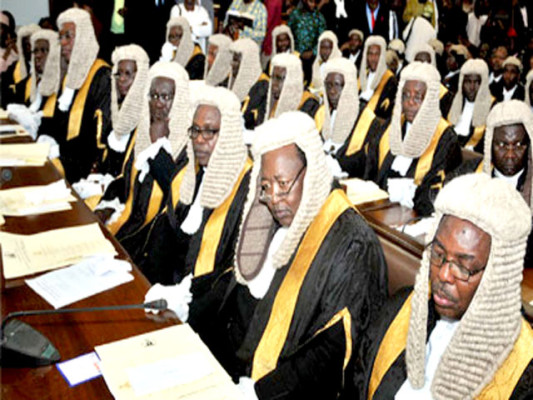 A 20-man group of aged Senior Advocates of Nigeria (SANs) under the aegis of the Justice Reform Project (JRP) has advised the government of Muhammadu Buhari to look beyond the former Chief Judge of Nigeria (CJN), Justice Walter Onnoghen, who resigned recently following allegation of none declaration of his assets, which amounted to corruption.

The group called on the government to take steps to similarly sanction other judges whose legitimate earnings are not commensurate with their wealth, saying that such action will restore confidence in the Judiciary and debunk the impression that the former Chief Justice of Nigeria (CJN) was being victimized.

The group, set up to push for reforms in the judiciary/legal profession, is led by one of the oldest SANs, Ebun Sofunde, with Jibrin Okutepa, Dr Babatunde Ajibade, Prof Ernest Ojukwu, Osaro Eghobamien, Mrs. Funke Adekoya, Kayode Sofola, among others, as members.

In a statement, JRP emphasized the need for the government to look beyond Onnoghen for three reason main reasons thus:

“Beyond Honourable Justice W. S. N. Onnoghen, however, the JRP believes the revelations that have been made in the course of this affair necessitate that urgent steps be taken to identify and sanction all other Nigerian judicial officers who are found to possess inexplicable wealth that cannot be reconciled with their legitimate income or their asset declarations, two of the allegations made against Justice Onnoghen.

“These steps are necessary for a variety of reasons. First, to restore public confidence in the judiciary and disabuse the notion that all judicial officers in Nigeria are corrupt and that justice is for sale.

“Second, to disabuse the notion that Justice Onnoghen’s travails are a mere witch-hunt motivated by ethnic and political interests rather than the result of a genuine concern for sanitising and reforming the Nigerian judiciary.

“Third, to eliminate the suspicion that the Executive arm of government is using the information it has access to by virtue of its control over the apparatus of the state to take selective action only against those judicial officers that fail to do its bidding.”