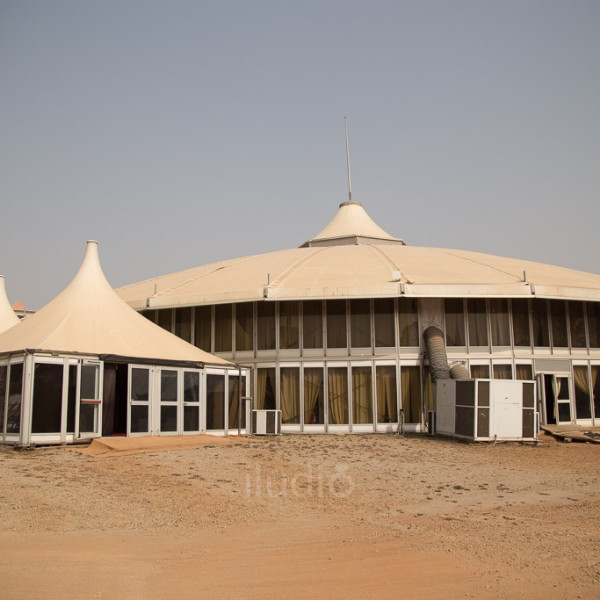 The Federal Capital Territory Administration through its investment arm, the Abuja Investment Company (AICL) has taken over the THISDAY Dome, in compliance with last week’s Appeal Court judgment. The publisher of newspapers has also been ordered to pay the FCT, the sum of N197,477,702 being an outstanding cumulative rent.
The Group Managing Director/Chief Executive Officer, Abuja Investment Company Limited, Dr. Musa Ahmed Musa, formally took over the property from the court bailiff on Friday.
The Group Managing Director recalled that in 2009, AICL was allocated Plot 702 Cadastral Zone A00, CBD, Abuja and thereafter entered into a 2-year lease agreement with Messrs Leaders and Company (Publishers of Thisday Newspaper) in respect of the said Plot, now popularly called “This Day Dome Arena.”
The lease agreement was effective from May 1, 2009.
“The total rent payable for the term was ₦97,094,284.02, of which Messrs Leaders & Company deposited the sum of ₦57,558,854.73 as part payment. The Lease Agreement provided that the balance of the rent in the sum of N39,495,429.30, was to be paid on or before August 31, 2009.
“In spite of several requests for payment, however, the balance of the rent remains outstanding as Messrs. Leaders & Company has flagrantly refused to pay,” Dr. Musa stressed.
He said that due to the company’s failure to pay the outstanding balance of rent, the AICL in its letter dated April 13, 2011, indicated to the company its unwillingness to renew the lease which expired on April 30, 2011, and requested M/S Leaders & Company to deliver vacant possession of the property at the end of the agreed lease period, which till date remains outstanding.
“M/S Leaders’ recalcitrant behavior was predicated on the fact that it is a media house and had made threats to use the media in blackmailing AICL and FCTA into not collecting its rent and also forfeiting its rights to the property. Notwithstanding all the propaganda, AICL
resorted to the only available remedy to it which was the law courts,” he added.
He said that the Administration went to court in 2012 to recover the property and judgment was passed in 2014, which was appealed by M/S Leaders & Company.
According to him, last week Thursday, the appeal failed and the company’s application for a stay of execution proceeding was also dismissed by the court.
At the site of taking over and handing over to the FCT Administration, Mrs. Ada Amadi of AICL Legal Department, said that the Court of Appeal also awarded the sum of N197,477,702.8 being cumulative outstanding of rent due to the FCT Administration.
She said that the structure at the site would be evaluated to ascertain its value, and if it was not up to the outstanding N197 million, the balance would be pursued through a garnishing proceeding in the Court. [myad]