Home NEWS Those Who Say I’m Running For 3rd Term Are Liars – President... 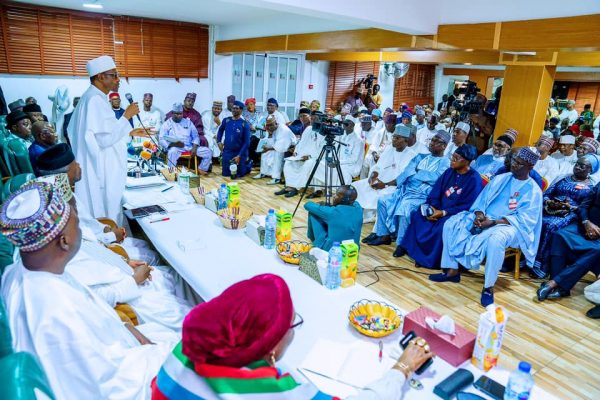 President Muhammadu Buhari has described those peddling rumour about his ambition for the third term in office as liars, saying that he cannot afford to be reckless with power.

The President, who spoke today, November 22, at the National Executive Committee (NEC) meeting of the ruling All Progressives Congress (APC) in Abuja, emphasized that he would not be needing the votes of Nigerians again in another election.

He said that apart from the fact that age is no longer on his side, he would not seek a third term in office because it is not backed or supported by the Nigerian constitution.

“I am not going to make mistake of attempting a third term or whatever term.

“Besides age, I swore by the holy book that I believe in and will go by the constitution.

“I know I am in my last term and I cannot afford to be reckless because I am not going to ask for anybody’s vote.”

See also:  I Will Not Allow Security Chiefs To Rest Until Insecurity Ends, Buhari Vows

In recent days, there have insinuations by some politicians that Buhari wis preparing the way for a third term in office.

Though those around him had always denied such moves, Buhari’s statement may have put paid to any such talk.