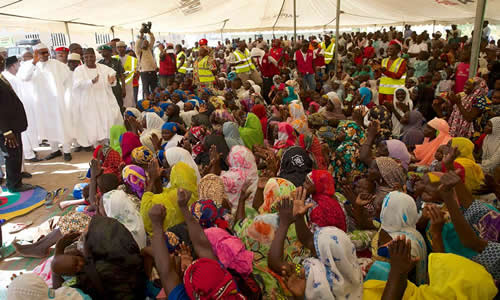 United Nations Children’s Fund (UNICEF) has waded into the poor education system in a Benue State Internationally Displaced People’s (IDP) centre, as there is virtually no school to take care of the out-of-school children in them.

The UN children education body said that it is therefore working towards providing a befitting learning centre for such children, numbering over 3,000.

UNICEF Chief Field Officer, Dr. Ibrahim Conteh, who spoke today, November 20 in Ukpam while fielding questions from newsmen after a monitoring visit of the two IDP camps at Daudu and Ukpam, in Guma LGA of the state, regretted the absence of a school structure to accommodate the children at the camp.

He added that children are being taught under trees, which, according to him, is not good for learning.

He made it clear that without education and the provision of basic learning materials, the future of the children would be bleak.

He assured that UNICEF would collaborate with the Benue State Government and other stakeholders in the education sector to ensure the construction of a structure for the children.

He said that there are gaps in the provision of all basic services at the camps, but that those that are of prime concern to them is education, health and sanitation.

The UNICEF chief also inaugurated four units of VIP toilets comprising 20 rooms, which it built for the Ukpam camp.

He said that the health of the  IDPs is of utmost importance to the organisation.

The News Agency of Nigeria (NAN) reports that while at the Daudu 1 solar powered water project, Conteh told the committee members to take ownership of the project and protect it against vandals.

He advised them to ensure minor repairs of  the facility while the Benue State Water and Sanitation Agency, which collaborated with them to provide the facility should  intervene in major repairs.

Mr Orkaa Cyprian, a resident of Mbayongo community, where the project is situated commended UNICEF for the provision of the water scheme adding that their search for potable water had ended.