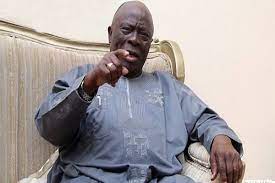 Pan-Yoruba sociocultural group, Afenifere, has warned that it would resist military take-over of any kind, even as it said that the clamour for change is borne out of frustration over the state of the nation.
The National Publicity Secretary of the group, Comrade Jare Ajayi in a statement today, May 6, said that military intervention in government was a curse “as it set the country back through various non-progressive and undemocratic policies it imposed on Nigeria.”
“Going by what the nation went through under the military, we will certainly not support another military rule in Nigeria under any guise.
“It is on record for example that apart from the general abridgement of the rights of Nigerians under the military, members of the the National Democratic Coalition (NADECO) masterminded by Afenifere suffered greatly.
“It is on record that we lost a lot of patriotic Nigerians all because
they were protesting against a continuous military rule.
“Pa Alfred Rewane was killed while the Leader of Afenifere then Pa
Abraham Adesanya narrowly escaped assassination attempts by agents of the the then military junta.
“Besides, with the benefit of hindsight, we can say without any
equivocation that military intervention in the governance of Nigeria has been more of a curse than blessing as it set the country back through various non-progressive and undemocratic policies it imposed on Nigeria.
“But for the military intervention in governance, we would not have had the kind of asphyxiating atmosphere we are having today in governance and in the socio-economic milieu.
“While we are not supporting military take-over of government, we could understand that those allegedly advocating for it are doing so out of frustration – a well-founded frustration for that matter.”
The group noted that the greatest kernel of people’s frustration could be located in the nadir level into which the country’s insecurity situation has sank.
The Afenifere spokesman added, “It has become so bad that bandits and terrorists are the ones dictating terms for governments.
“They have even annexed some territories for themselves within the country. We have never had it this bad! Terrorists have the audacity to say that they will kill 15 innocent students in their captivity if named ransoms are not paid.
“How would people not, out of frustration and seeming helplessness, call for a change of government since the government has failed in its primary duty of providing security and welfare for the people?
“Our own take here, therefore, is for government to sit up, show that it is really in control by putting a total stop to terrorism,
kidnapping and banditry, by stopping Nepotism, by letting the country return to true Federalism without further delay.”
Source: Daily Trust.