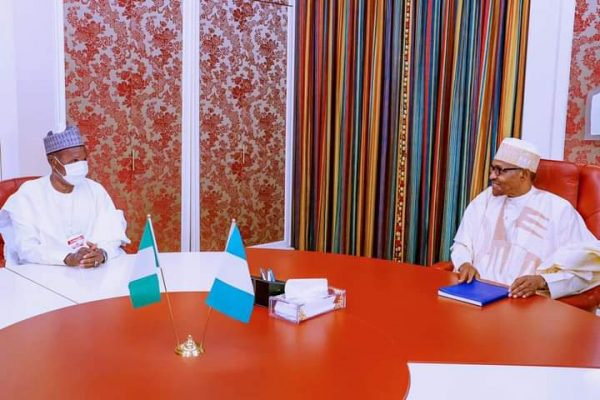 Governor Bello Masari of Katsina State has predicted a bumper harvest in the state despite the spate of banditry attacks on communities and killing of innocent people.
Governor Masari, who answered reporters’ questions today, August 5, shortly after a private audience with President Muhammadu Buhari at the presidential villa, Abuja admitted that banditry would obviously affect food production in some areas.
“Certainly, there is going to be some issues, because in the entire state, it is only nine local governments out of 34 that are affected, and even in the nine local governments affected, it is only villages and areas that are bordering the forests that face the challenge.
“So, I admit that in some of the areas, there may be some drawbacks, but on a general note, the season looks good.
“We are hoping that we will have a bumper harvest.”
He said that he and President Buhari spent more than 30 minutes during the private audience discussing the current security situation in the state, adding that so far, the situation is under control.
“But it is not over until it is over and we have discussed extensively and offered our own suggestions and those of us who are on ground and that is actually what we discussed with the President.”
Governor Masari said that currently over 2,000 military personnel and officers are in Katsina for their annual super camp, adding that it is a signal to the bandits that the military is ready and willing and have the capability and  capacity to deal with the situation.
He hoped that the military, including the police and other security agencies, have been given the marching orders.
“To control the situation by all means is a task that must be done because we cannot allow the situation in the North West to develop like  it has in the North East. So, I think the people living in the rural communities will testify that actions are ongoing and those that are being displaced are being well taken care of and so this is the situation .