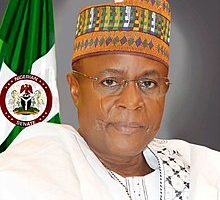 The Senate has said that it has no power to declare any state, much less, Kogi, as oil producing entity through a mere motion.

The Senate decision came on the heels of a motion presented by the senator representing Kogi East Senatorial District, Isaac Alfa, seeking for Kogi to be recognized as an oil producing state. The motion was entitled: “Need to Recognize Kogi State as an Oil-Producing State.”

After the Senate at a plenary today, Wednesday, turned down the motion, Senator Isaac Alfa refused to withdraw it saying: “I have moved the motion and I am not ready to withdraw it.”

According to the senator, the companies have collectively drilled 25 exploration wells, two appraisal wells and eight core drill wells in the entire Anambra Basin, out of which majority of the wells fall within Kogi State.

He said that the exploration activities in Kogi and part of Anambra Basin were later abandoned until July 18, 2001, when the late Abubakar Audthen, the then Kogi Governor, wrote to the then Group Managing Director of NNPC to remind him of the earlier discovery of crude oil at Odeke, Echeno, and Anocha communities in Ibaji LGA.

Senator Alfa recalled that on July 25, 2001, a team of geo-scientist and engineers was drafted to the area to carry out a preliminary investigation on the claims by the Kogi State Government and the resuscitation of the productive core wells, leading to the granting of an oil license now known as Oil Prospecting License 915 and 916, to an indigenous company.

“Orient Petroleum Resources Plc has been taking crude oil from OPL 915 since 2012 till date, and the percentages of crude oil in the OPL 915 among the three contesting states are as follows: Kogi, 53 per cent; Anambra, 23 per cent; Enugu, 17 per cent; and Edo, seven per cent.

“This issue of oil-producing cannot be decided on the floor by a motion; it has to be decided by contribution to the Federation Account.”