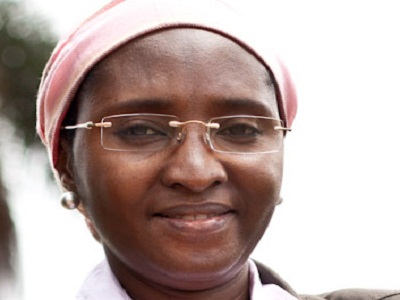 President Muhammadu Buhari has given reasons why he decided to assign two powerful ministries to Hajiya Zainab Ahmed Shamsuna. She is minister of both Finance and Budget/National planning.
Speaking at the palace of the Emir of Zazzau in Kaduna state when he paid him a visit today, August 22, President Buhari acknowledged the commitment of Hajiya Zainab to his government’s actions at making life better for Nigerians.
“I also chose her because of her wealth of experience,” the President said, even as he made it clear that giving Kaduna State two ministerial slots is a way of showing his appreciation for the support the people of the state have been giving him.
He acknowledged that the state gave him one of the highest votes in the February 23 Presidential election, adding that he would do much to show his appreciation.
“I have heard the shopping list presented by the Emir. Despite the hard times, I will try to fulfill most of the desires of the people of the emirate so that when I leave office, I will be remembered for what I’m able to give.”
President Buhari said that the water project he had gone to commission in the emirate was part of the programme of the All Progressives Congress (APC)  governments in the state and federal government to meet the essential needs of the people.
The Emir, Alhaji Dr. Shehu Idris had asked the president look into the issue of collapse of industries in the state.
He also requested the president for financial intervention in the Ahmadu Bello University Teaching Hospital, the largest in the country that was established in 1967.
Emir Shehu Idris begged President Buhari to rehabilitate Zaria-Pambegua road,  Kaduna-Jos road and Zaria -Funtua road.
He commended the President for his efforts in the fight against insecurity, adding that Kaduna State is now enjoying peaceful coexistence.
“We are highly delighted to say that the visit your Excellency today, will mark another history in my palace when you will honour us with commissioning of the Zaria Water Supply Expansion Project. We do hope that by this gigantic effect, the perennial water shortage in Zaria and environs will be a thing of the past.”

Aisha Buhari To Gov El-Rufai: I Am Deeply Touched By Your Coronavirus Status