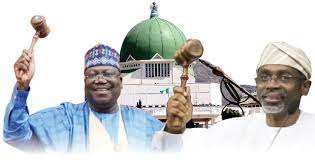 The leadership of the National Assembly has said that the legislature increased the 2023 budget, signed by President Muhammadu Buhari based on the “realities on the ground.”

Speaking to newsmen separately after the Presidential assent to the budget at the Presidential villa today, January 3, the Senate President, Ahmed Lawan and Speaker of the House of Representatives, Femi Gbajabiamila said: “we have during  budget defense, we have ministries, we have departments, we have agencies that come to talk to us. And we look at the reality of ground and what they have before them. And whether or not they can actually, execute their mandate as per their ministries and departments.

“It now behoves on the National Assembly, where it dims for to adjust figures, either downwards or upwards. And that’s exactly what we have done.

“You see the problem with the National Assembly is that you can’t win to lose. If you return the budget the exact way it is you’re called rubber stamp. If you do what you’re supposed to do and adjust figures for the good of the country, you call it jacking up or inflation, or padding.

“So I think the National Assembly has done very well in meeting its constitutional mandate. It takes all arms of government to be on board to give a true working document for the country. “The executive did everything they could. And we have even a wider view, a bird’s eye view of what’s going on in all the agencies. And we have also complemented what the executive has done. There’s no you did you didn’t do. No. It’s all for the good of the country. And that’s what we’ve done.

“Ours is for us to receive proposals and that’s why they’re called proposals. Anywhere in the world, it is now for the National Assembly or the legislature. We need to collate all those proposals, look at what’s on ground in the in the various constituencies.”

While signing the budget earlier today, Presidnet Buhari had complained that the National Assembly increased the size of the original proposal he presented to it by over N770 billion.