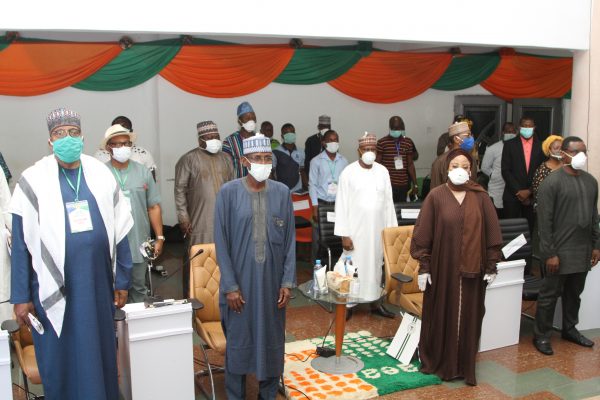 World Health Organization (WHO) has commended the Federal Capital Territory Administration for its quick and rapid response to coronavirus pandemic in Abuja.

The Organization’s new Country Representative for Nigeria, Dr. Walter Kazadi Mulombo, who led a delegation of officials of the Organization on a courtesy visit to the FCTA yesterday, September 22, acknowledged the effectiveness of the actions of the FCTA in the fight against the virus.

“When I arrived on the 19th of June, I was surprised by the organization I saw at the airport, the way I was received, the way I went through all the processes and where I stayed in quarantine for 14 days, it was so perfect. It was really something that was properly done. So, I wish to congratulate you on that one.”

He called for continued vigilance from the populace until a vaccine is developed, adding: “COVID-19 is here to stay with us for some time until we find an effective vaccine. But until then, you need to remain vigilant. The only tool here is non-pharmaceutical intervention. I’m happy to see that we are wearing face masks.

“It’s very important that we continue to adhere to those principles of social distancing because the other tools are being experimented. So, we need to make sure that what we are seeing, the downward decline in cases actually translates the truth of what is going on in the communities.”

The WHO Country Representative also called for a collaboration between his organization and the FCTA for the effective control of the disease and its effects both on the health and economic sides.

While commending the FCTA for its role in the eradication of polio in Nigeria which he said has paved the way for the entire African continent being certified as polio free, he pledged the support of the WHO to the FCTA in its efforts at ensuring that as many residents as possible are enrolled in the FCT Health Insurance Scheme.

“We have your agenda as our preoccupation. Your priorities are our priorities. We want to continue to support the FCT until such a time that everybody benefits from universal health coverage.”

He also called on the FCT to continue to pave the way so that its policies can be replicated in other states of the country.

This was as the Minister, Malam Muhammad Musa Bello,  said that the FCTA has always enjoyed a very close working relationship with the World Health Organisation and wished Dr Mulombo a successful tenure in Nigeria.

He said that whatever successes the FCTA had achieved in the sector was also due to the collaborative efforts with the WHO and remarked that the priority of the FCTA in the health sector is the development of the Primary health care system.

He called on the WHO to assist in the areas of capacity building in ensuring that primary healthcare centers are self-sustaining with improved funding and better legislation.