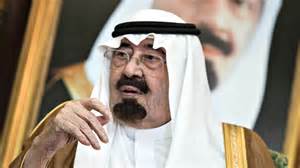 President Goodluck Jonathan has joined other world leaders in commiserating with King Salman Ibn Abdulaziz and the people of Saudi Arabia on the death of his predecessor, King Abdullah Ibn Abdulaziz.

In a condolence letter to the new Saudi Monarch, President Jonathan said that King Abdullah will also be long remembered for entrenching the process of progressive reform in his country.

The President said that he was confident that the existing cordial and mutually-beneficial relations between Nigeria and Saudi Arabia will be maintained and further strengthened under King Salman.

“I have received with great sadness, news of the death of His Highness, King Abdullah Ibn Abdulaziz at the grand age of 90.

“On behalf of the Government and people of the Federal Republic of Nigeria, I wish to express my heartfelt condolences at the sad loss of this illustrious monarch and revered leader.  Our thoughts go out to the people of Saudi Arabia and, particularly, the Saudi royal family at this time.

“King Abdullah will be remembered for entrenching the process of progressive reform, enduring stability and economic consolidation in Saudi Arabia, while preserving the Kingdom’s place as the universally acclaimed centre of the Islamic faith.

“While the Government and people of Nigeria share in your loss, we are hopeful that you and the entire people of the Kingdom of Saudi Arabia would be comforted by the enduring legacy of selfless service that King Abdullah leaves behind.

“As Your Highness ascends to the throne as King of Saudi Arabia and Custodian of the Two Holy Mosques, I am confident that the excellent fraternal relations and productive partnership that have always existed between our two countries and peoples will be further strengthened and deepened in the years ahead.” [myad]