Home NEWS Yes, Buhari Is My Friend, So What? Ebony Gov, Umahi Asks 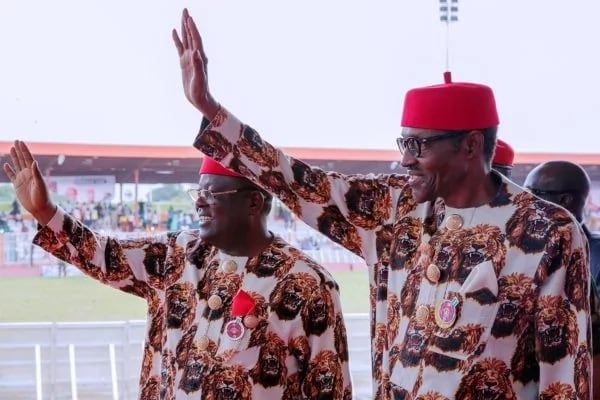 Governor David Umahi of Ebonyi State has admitted that President Muhammadu Buhari is his friend despite belonging to the opposition People Democratic Party (PDP).

Governor Umahi, who spoke on Friday night in Abakaliki during the quarterly media chat/ dinner as part of celebrations to mark the nation’s 58th anniversary and 22ndyear of the state’s creation, said that their relationship was beyond politics.

The governor said that the State Government would name the one and half kilometre glass tunnel it is constructing after Buhari as it would be one of the best in the world.

“I want to state that aside my wife, Buhari remains my only boss and should be respected by Nigerians because of his status as the president.

“Buhari as the president is the symbol of the country just as the governor’s are mini-presidents in their respective states.

“The fact is that as a human being, he might not be doing everything correctly, but the citizens owe him prayers and understanding to lead the country aright.

“I have said repeatedly that I don’t have to insult him to show that I am a PDP member and it is not my duty as a governor to insult the president.

“This does not mean that I do not identify with the ideals of the PDP, but it must be stated that those who say they are supporting Buhari in Ebonyi are only deceiving the people.”

The governor said that the opposition in the state is only interested in his job and not genuinely supporting the president, even as he vowed not to allow them to take the position from him.

“The northern senatorial zone of the state produced a governor who served for eight years; the central zone did the same and the southern zone where I hail from should be allowed to complete its eight-year tenure.

“This is the tripod on which the state’s equity rests and even though a sitting governor wanted to truncate it, God brought a David in my person to ensure it was maintained and it will be maintained till the end.”

Governor Umahi advised Nigerians to realize that power comes from God and to check the brazen quest for political offices which has brought several problems to the country.

“Politicking has recklessly taken the centre stage in the nation’s affairs and if such is not checked for the next four years, it would be difficult for the country to handle its consequences.

“The common man in the country just needs food on his table as politics has become a means of profiteering even from those who have nothing to offer to the people.”

The governor, who took time to enumerate his administration’s strides in the areas of infrastructure, agriculture, education, heath, human empowerment, among others, noted that his decision to modernize the state capital was irreversible.

Media practitioners from within and outside the state took turns to ask several questions bordering on the state’s existence and made general comments, at the occasion.