Home NEWS You Are Not Helping Workers If You Go On Strike, Governors Tell... 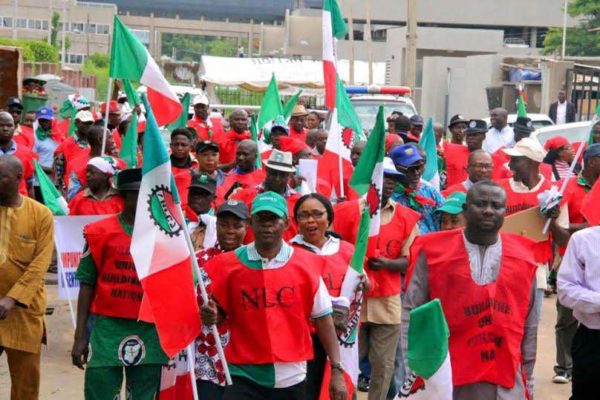 The Nigeria Governors’ Forum (NGF) has pleaded with the Nigerian Labour Congress (NLC) and the Trade Union Congress (TUC) to stop their plan to embark on nationwide strike, starting from Monday, as such strike will not improve the already bad economic conditions of the Nigerian workers.

The governors, who met with leaders of the organized labour today, September 28 at the Abuja residence of the Chairman of the NGF, Governor Kayode Fayemi of Ekiti State, said: “the plight of workers in the country was already in dire straits and that any action embarked upon by the union at this time would further worsen their situation

The governors’ chairman was quoted, in a statement by the NGF’s spokesman, Abulrazaque Bello-Barkindo as saying that no one that is conversant with the prevailing situation in the country would disagree with labour and its demands, as it were, but pleaded that Governors be given time to consult more broadly with the various stakeholders, including the Secretary to the Government of the Federation, Boss Mustapha, the Vice President and the President.

The statement said that Dr. Fayemi expressed the hope that this gesture from the governors would also energize the leadership of labour to put a hold on their planned action, adding that Government and Labour are not that far apart in the negotiation and the differences are not irreconcilable.

“Our President who is always on the side of workers will not be averse to the issues being raised and I’m hopeful for an amicable settlement on the issues highlighted.”

At the meeting which was attended by the NLC President, Comrade Ayuba Wabba, the TUC President, Quadri Olaleye, the NLC General Secretary, Emmanuel Ugboajah and the Director General of the NGF, Asishana Okauru, the NLC accused the Federal Government of violating the time-tested global process of dialogue.

The NLC President was quoted as saying: “when the cost of PMS rises, the cost of everything in the country rises with it,” even as he praised the NGF Chairman for agreeing to broaden the mechanism for consultation on the matter.

“I praise you for showing a good grasp of this matter and I believe that if they had widened the mechanism for consultation and involved people like you, we wouldn’t have come to this pass.”‎