Home FEATURES You Have No Power To Invite Me, Justice Minister Tells Senate 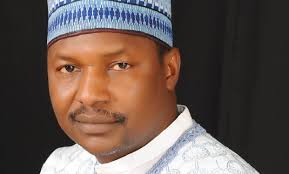 The Attorney General of Federation and Minister of Justice, A‎bubakar Malami, has made it clear to the Senate that it had no power to invite him over the ongoing trial of forgery of the Senate’s Rules book, preferred against the President of the Senate, Dr. Abubakar Bukola Saraki; his Deputy, Ike Ekweremadu; the outgoing Clerk to the National Assembly, Alhaji Salisu Maikasuwa and the Deputy Clerk, Ben Efeturi.

Malami, who spoke through the Special Assistant to President Muhammadu Buhari on Public Prosecution, Okoi Obono-Oblo, who appeared on his behalf on the invitation of the Senate, said that the Red Chamber lacked the jurisdiction to handle the matter.
The Senate had ordered Malami to appear before its Committee on Judiciary, Human Rights and Legal Matters to explain why he had to intervene in the internal affairs of the legislature.
Malami’s representative told the Senate Committee that the matter had gone beyond the Senate, saying that neither the Committee nor the Senate has the jurisdiction over a matter that is already in court.
“This committee has no jurisdiction on this matter. It is clearly beyond it.”
He  informed the Committee that Malami, whom he intended to represent at the session, is not answerable to the Senate, but the President.
The Presidential Aide, who was consequently walked out by the Committee after the offensive submission and on account of not being the one summoned, fired more salvos at the Committee while fielding questions from journalists.
Obono-Obla said: “The AG has not done anything wrong. The AG has not undermined democracy. He acted pursuant to his powers vested on him by the Constitution.
“Section 174 (1) says he can prosecute anybody. And he has done that. The Senate is not on trial.
“He has not taken the Senate to court. He has taken four persons to court. They are not the Senate.
“Being President of the Senate does not make you the Senate of the Federal Republic of Nigeria.
“The matter was investigated by the police and a prima facie case was established and the AG invoked his powers under Section 174 (1) to initiate criminal proceedings against those persons.
“And this matter is now before a court of law. There is separation of powers in Nigeria.
“It is not the position of the Senate to constitute themselves into a court of law.‎”
When newsmen sought to know whether the matter is the internal affairs of the Senate, Malami’s representative said: “It is not true. If I go to the chambers of the National Assembly to shoot you, would it be an internal affair?
“The Senate Rule is a law and somebody allegedly forged the rules.”
On the issue of not inviting Saraki by the police, he said: “It doesn’t matter. So, let him go and tell that to the court. That is why he should hands off and allow the court to hear this matter.
“At the end of the day, if it is established that this charge is frivolous, the court will discharge him. But not to take the position that the AG has committed any crime.
“He’s not answerable to them.
“B‎y virtue of the principle of Separation of Powers, he is answerable to the President who appointed him. And he has not done anything wrong. Y‎ou cannot be a judge in your own case.
“We don’t have confidence in the committee.”
The Committee, however, resolved to report the non appearance of Malami before it on the forgery case to the Senate plenary for appropriate action. ‎
The Committee Chairman, David Umaru, said: “having invited the AGF twice to appear before us as mandated by the Senate without him responding to the summons, this committee will surely report the matter to Senate-in-Plenary for appropriate action.” [myad]