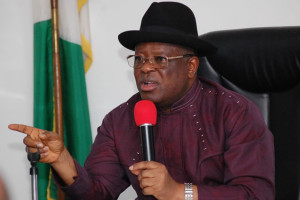 Governor David Umahi of Ebonyi State has accused the factional chairman of the All Progressives Congress (APC) in the state, Pastor Eze Nwachukwu Eze of being a bigger thief than he is.

The governor is angry with Pastor for being on his jugular by asking him to resign over what he considers as massive fraud  in the state under his watch.

A statement by his Chief Press Secretary, Emma Anya, quoted governor Umahi as asking Pastor Eze to face his criminal charge in court and desist from distracting his government from delivering democracy dividends to Ebonyians.
The governor stressed that Pastor  Eze lacks credibility in all fronts  to have the moral justification to beam a searchlight him and his administration..

“Eze   is known to be facing criminal charge in the   state High Court for forging the signatures of some genuine APC members endorsing him as the party’s chairman in Ebonyi State. The government has documentary evidence about this which we intend to publish in due course.”

Governor Umahi said that he is happy that the public is aware that Pastor Eze is an impostor who is neither the APC chairman in the state nor a genuine member of the party, adding: “if he claims to be a genuine APC member, he should be more interested in finding ways to and means of uniting the party members.”

See also:  NatureNews Newspaper Names Emir Sanusi As Chairman Of Its Advisory Board

He said  that Pastor Eze is an agent of Abuja-based politicians whose primary desire  is  to truncate the existing  peace in the state and discredit his government, stressing that the good thing  is  that the people of Ebonyi who gave their mandate to him  to exercise on their behalf  would never allow agents of the devil to have their negative desires come to pass.

Governor Umahi said that he knew that Pastor Eze and his masters were peeved by the earth-shaking allegation by Justice Ngwuta that Dr. Ogbonnaya Onu attempted to bribe him in order to have his mandate thwarted through the judiciary but God exposed their plot and brought shame to them.
Governor Umahi also accused Pastor Eze of openly selling empowerment forms to unemployed youths of Ohaukwu local government claiming that it was a Federal Government directive,

He pointed out   that the good thing is that his government had intervened by empowering over 4,500 unemployed youths and women of Ebonyi State and provided the sum of N250, 000 to them  to embark on business of their choice. [myad]