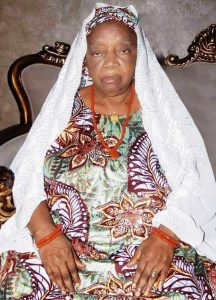 Mrs. Hajara Momoh Akata, 78 years old Mother of the Kogi State Accountant General, Alhaji Jubril Momoh is dead. She died today, January 6 at Nagazi quarters in Adavi local government area of the state after a brief illness.
The son, Jubril Momoh, who announced the death, said: “it is with a heavy heart that we announce the passing unto glory of our Mother, Aunt, Sister and grandmother, Hajiya Hajara Momoh Akata, mother of kogi state Accountant General. She passed on today after a brief illness at her residence in Nagazi.
“May Almighty Allah comfort her family during this trying Time and May Her gentle soul rest in peace, Aamen.”
In a condolence message, the Governor of the State, Alhaji Yahaya Bello described the death of Madam Hajara as a sad development.
In a letter of condolence signed by his Chief Press Secretary, Muhammed Onogwu, the governor said that the death of the mother of the accountant general was a sorrowful experience which cut deep into the heart.
The Governor said that although mama lived a very fulfilled life, it would still be painful, knowing that one could no longer share her physical company, counselling and prayers but only just memories, adding that death was surely an inevitable destiny of every human.
He attested that Hajiya Momoh dedicated her life as a woman of virtue, a prayerful mother and dedicated wife whose interest was solely to raising her children to become useful and responsible contributors to the society.
Governor Bello said that it was obvious that Hajiya succeeded in her earthly assignment, seeing the quality of children she had raised and also that Mama lived a life that touched other’s positively
While praying to God to grant the repose of Hajiya Momoh eternal rest, he also asked God to give those grieving over her passing the fortitude to bear the loss.