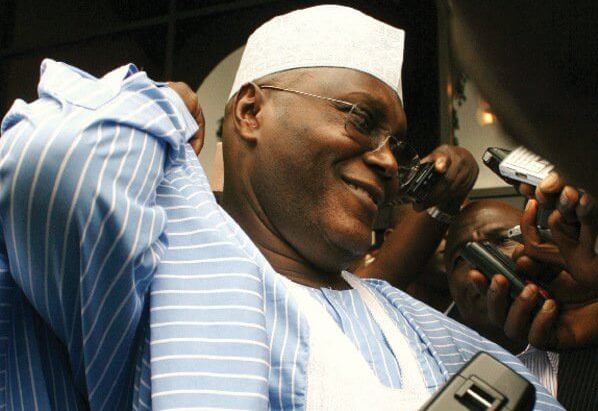 Honestly, I like the fighting spirit of Alhaji Atiku Abubakar, the Wazirin Adamawa.

It is the kind of spirit we had way back when we were kids. Those were the days we would go on hunting expeditions in nearby bush. We would go with catapults to hunt certain edible birds. When we sighted the birds, we would continue to pull the rubbers, strewn to Y-shape sticks and release the pebbles from them, but the preys would fly away, dodging menacingly flying pebbles. We would not be discouraged, but would keep repeating the same thing, chasing the frightened birds which would be flying from one tree branch to the other. Most times, after several trials, we would get them down, dead or half dead. And our mission would have been confirmed as fulfilled.

Recall that Atiku, the former Nigerian Vice President, originally on the platform of the Peoples Democratic Party (PDP), desirous of becoming the President of Nigeria, almost dribbled his then boss, President Olusegun Aremu Okikiola Obasanjo  ‘oko Stella.’ It is on record that as Vice President, Atiku tried to shove Obasanjo aside to inherit the presidency from Obasanjo, forcing him (Obasanjo) to even go down on his knees to beg Atiku to allow him to go for second-term.

Ever since then, Atiku had never rested nor blinked, but only that he was jumping from one political party to the other with only one aim: to be President of the country just the same way we did during our youthful pastime of hunting birds.

His sojourn saw him in the Action Congress (a political party with its base mainly in the South West). He managed to get the Presidential ticket of the AC, but he could not make it across to the next level.

Shortly after losing the election on the platform of the AC, Atiku returned to the PDP but threw it into confusion at the advent of the 2015 general elections. He broke away from the PDP to form newPDP which subsequently participated in the historic merger of the progressives to form the All Progressives Congress (APC) ahead of the 2015 general elections.

He did not fail to contest as aspirant, the presidency of the APC in 2014, but he came a distant third, after Muhammadu Buhari and Rabiu Musa Kwankwaso, one time governor of Kano State.

Still aiming to grab the prized number one position in the land, Atiku defected from the APC, along with almost all the leaders of the PDP with whom he defected in 2014 to form the APC back to the PDP. He re-strategized for the position with his attention well focused.

However, those who had remained in the PDP after the 2015 defeat by the APC; those who struggled to rebuild the party, and whom Atiku and his group left to leak the wound of defeat, did not seem to realize what was coming when Atiku returned. They took the dodged ambition of the Wazirin Adamawa for granted.

Those are they who toiled, planned and prayed for the party not to go under, not to enter history as the largest party in the whole of Africa..

But they wrote Atiku off, at their own peril, as a rolling stone that would gather no moss. They never gave it a thought that Atiku was ever ready, I won’t say desperate, to give himself out or sacrifice anything, I mean anything, to clinch the post onto which he had put his life, especially so as it appeared that this time, in 2018, it could be the last time he would have the opportunity to attempt at fulfilling his dream. The age is not on his side.

And in Port Harcourt last week, while the governors, especially, that of the host state, Wike and Fayose planned to throw up their friend from Sokoto, Aminu Tambuwal as their choice for the Presidency and worked hard for it, Atiku played his ‘joker’ and got the prized party presidential ticket. He left the party’s re-constructors gasping for air.

How it happened, why it happened and what happened before and during the Port Harcourt political chess game doesn’t matter now. What matters really is, from here, where does PDP go? With the ticket of the party firmly in the hand of Atiku, who had spent nearly 12 years looking for it…?