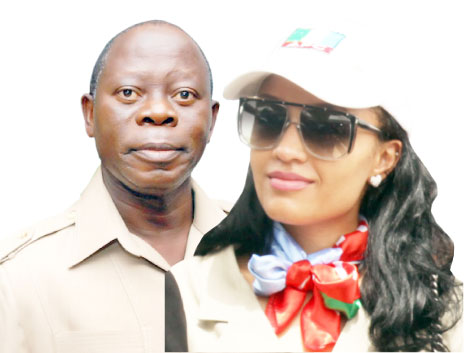 When the news first filtered out quoting governor Adams Aliyu Oshiomhole as having said that he met his new wife, Lara Forte as a virgin, my first reaction was to dismiss it as the concoction of some lazy journalists.
That is because, there is virtually no sense in anybody bragging publicly about how he met his wife, much less a public figure like Oshiomhole who has so many official assignments before him.
But true, at their wedding thanksgiving service, Oshiomhole did say “I can boldly tell all of you that I was a very principled man during my first marriage. I didn’t succumb to the worldly pleasures of this lustful environment, even though I had lots of opportunities. And it was this principled sobriety that made me fish for a virgin wife.
“I can boldly say to you all that I was the first man to know her (Lara Fortes) and initiated her into the worldly ways.
“This is the kind of spirit I want Edo youths to inculcate, instead of messing around and engaging in different shades of adultery and fornication.”
As a matter of fact, the issue of sexual relationship between couple, in Africa culture, ought to be a purely domestic affair. No matter how the world had gone crazy by abandoning some kind of moral uprightness, we have not come to the lowly level where even a young man would take his sexual relation with his wife to a public domain.
By this childish musing or boasting or both, Governor Oshiomhole has simply elevated gossip to official status, for, it is not clear what he wanted to achieve by that.
Of course, what he may not know, and I am not suggesting anything negative, is that women are naturally cunning and can fake anything. They fake their hairdo, their nails, their breasts, their buttocks and even their skin colour and height. It was even a woman, who said, when she read the Oshiomhole childish excitement, that women do also fake virginity.
According to her, all a woman needs to do to convince a man that she is virgin is to continue to apply certain cream everyday for three months and or certain drug, which would make her system to be so tightened that when a man wants to use her, it would burst out and ooze blood.
Oshiomhole’s excitement reminds me of a middle age Nigerian who was asked to write his curriculum vitae. After putting down his educational attainments, he added with emphasis that he was blessed with eight children.
One hopes that Oshiomhole would not add to his curriculum vitae that he met his second wife, after the death of the first one, a virgin? He would only be inviting laughter from those who are serious minded. [myad]