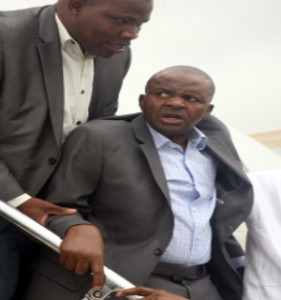 Alhaji Danbaba Suntai must have been a special creation of God, which ordinary mortals may not be able to comprehend. This is a man who fell flat from a fast moving helicopter on October 25 as governor of Taraba state, came out of the rubbles, looking disjointed, taken to far away land for medical attention and exactly ten months later, returned to Nigeria in one piece, still as governor of the state.

Suntai, irrespective of the condition under which he returned to the country on Sunday, August 25, did not foreclose the fact of the speciality of his situation as one of the species of Allah.

It is interesting to note in passing that while he was in far away land receiving medical attention, his counterpart, Mr. Patrick Ibrahim Yakowa had similar helicopter accident and died instantly on the spot.

To be sure, governor Suntai, his aide-de-camp and chief security officer were involved in the plane crash which occurred shortly after taken off from Jalingo, the Taraba State capital. Those involved in the accident were seriously injured.
Suntai, who graduated as a pilot from the Aviation College in Zaria last year, was piloting the crashed plane. That accident was the second time he was surviving a plane crash.
It was gathered that the plane, a Cessna 208, 5N-BMJ, owned by the state government, crashed at about 7.45 pm, near the Nigerian National Petroleum Corporation (NNPC) depot, on the outskirts of Yola.

The governor, who was brought in unconscious, was first taken to Yola Specialist Hospital for treatment, but was later moved to the better-equipped Federal Medical Centre, Yola.
The governor, earlier in the day, had hosted the Cuban Ambassador to Nigeria, Hugo Ramos Minnes, who had paid him a courtesy visit before embarking on the trip.

There was pandemonium in Jalingo when the news of the crash filtered into the town as residents were thrown into mourning following reports that the governor had died in the crash.

After all the fears, the uncertainties, the expectations and all that trailed his accident and departure to foreign lands for treatment, Suntai returned to the country, via Nnamdi Azikiwe International Airport, Abuja on Sunday. A chartered Gulfstream jet touched the tarmac at about 1:00 PM Nigerian time and he was assisted out of the jet after which he was helped into a Land Cruiser SUV to the VIP section of the airport.

There has been some kind of murmuring aas to whether he would want to claim his position as governor of Taraba state. Of course, the constitution does not stop him from taking over his position, but if I were him, I would voluntarily relinquish that right, as a way of thanking Allah for making me to still be alive. I would prefer to spend the rest of my life, enjoying quiet moment with members of my immediate family.

There is nothing Suntai would want from Allah more than the second chance He has made possible for him to appreciate His kindness and Mercy on him.