Home OPINION COLUMNISTS Little People As Little Balls Of Power, A Tribute to Oshiomhole @ 67, By... 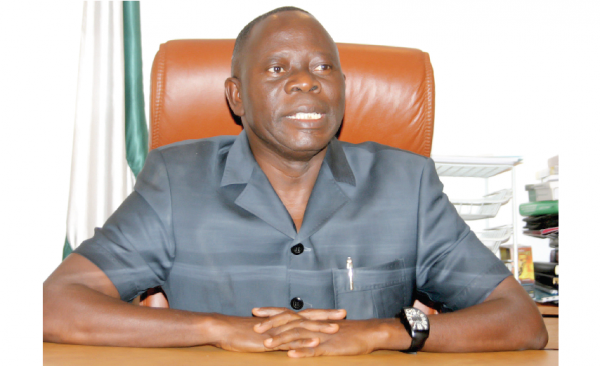 Whether or not it is true that dynamite comes in small packages is a matter for public contemplation. But I saw what approximated to the truth in the quote, attributed to an unknown author, after reading artist, hobbyist and literati, Jonathan Magistad’s response to it, wherein he said “amen to that! We little people are little balls of power!”

Glasses-wearing Magistad is at home with his little stature but quick to posit that his small stature houses the magnitude of his intellectual power. Therefore, what he lacks in physical stature, he makes up for with his brainy exertions. He fittingly describes his powerful cerebral output as little balls of power.

Indeed, it is not Magistad’s stature or the attire that he puts on that defines his quintessential personality. What defines him is far more transcendent than the ridiculous and the mundane. What defines him is his mesmeric intellectual firepower, which he deploys in its vast flourish to address and interrogate existential issues of life.

Magistad bears some similitude with our own Comrade Adams Oshiomhole. Surprisingly, Oshiomhole’s response to the issue of his diminutive stature was implicitly a ricochet of Magistad’s “we little people are little balls of power.” Read Oshiomhole: “Some people say that I am short but fail to tell the world what I am short of.”

In a piece I wrote in June 2018 titled: “APC and Oshiomhole’s legerdemain” to capture the atmospherics and nuances of our encounter at the Ladi Kwali Hall of Sheraton Hotel and Towers, Abuja, where he hosted a dinner in celebration of the posthumous national honours conferred by President Muhammadu Buhari on the winner of the annulled June 12 1993 presidential election, Chief M.K.O Abiola and human rights lawyer, the late Chief Gani Fawehinmi, I had weighed in with the virtues that Oshiomhole is not short of, to wit: brilliance, wits, patriotism, commitment and conviction.

I had expected those to whom he referred to take up the gauntlet by telling the world what Oshiomhole is short of. Oshiomhole’s sense of personal knowledge and appreciation of the assessment or measurement of his individuality by the significant others discounts the intent of those significant others to put him down in the public space in a conquistadorial fashion just because they are uncomfortable with the force of oration and intelligent ripostes of an irritating, diminutive but restless spirit.

But Oshiomhole had long overcome all the artificial limitations and emerged as the inimitable public space intellectual that he is.  The comrade is a restless and fecund orator of the very utilitarian hue. He has, without a doubt, prepared himself for engagements with existential issues especially those that verge on labour unionism, politics (governance) and economy.

Oshiomhole is wired. Like a dynamite! Yes, the same dynamite – that dangerous innovative invention by the Swedish chemist and engineer Alfred Nobel which he patented in 1867 and rapidly gained wide-scale use as a more powerful alternative to black powder. The Oshiomhole dynamite has been more potent than other elements that pretend to be critical in national discourses and conversations.  He had ripped through the Nigerian polity at different epochs in episodic ramifications: at the levels of his robust Nigeria Labour Congress (NLC) presidency and governorship of Edo state

Therefore, Oshiomhole must be handled with respect even by those who may pretend to own him, as he cannot really be commercialized or privatized. He is not a man given to political chicanery. He is however ready to go the whole hog with anybody on shared principles and trust.  In public space engagements that require the deployment of facts, figures, logic and even adversarial stunts, in pushing through positions, Oshiomhole is not anyone’s run-of-the-mill opponent.

As NLC president, he was the nemesis of President Olusegun Obasanjo’s administration in appropriate pump prices of petroleum products and salary matters.  As governor in Edo, he was a spike in the flesh of the political godfathers. He successfully contended with their influence to enjoy a two-term governorship and install a successor.

In the saddle as national chair of the APC, he had deployed his mantras of party discipline and return of the party to the people to truncate the governorship aspirations of two ministers and to stop some self-appointed imperial governors from using their machinery in their states to foist their anointed successors on the people through illegal indirect primary election. Ogun and Imo States remain two good examples.

Oshiomhole has continued to rambunctiously exert his leadership mojo in the affairs of the APC post-2019 general election. He is in a joyous mood, especially over the party’s victory in the presidential election. That the APC controls the majority seats in the National Assembly has equally excited him.

He has kept his eyes on the ball of driving party and government architectures in synergy for a robust delivery of the electioneering promises that verge on taking Nigeria to the next level. This, to him, is doable with the right kind of leadership in the Federal Legislature. This is perhaps the reason he has led the party to think ahead by identifying those that fit the positions.

Successful business mogul, Bill Gates, in his book “Thinking Ahead” declared: “History is full of now iconic examples- (remember) the Oxford professor who in 1878 dismissed the electric light bulb as a gimmick, (and life proved he was wrong), the commissioner of US patents, who in 1899, asked that his office be abolished because everything that had been invented has been invented.”

As far as Oshiomhole is concerned, nothing is significantly settled that needs no further improvements by the party. Once the party has settled issues at necessary intersections, they remain settled.  So the APC, under his leadership, exists to prove wrong certain assumptions, conventions and constitutional provisions about the election of National Assembly leadership.

The “dynamite” has burrowed his head in the sand of the Federal Legislature. Will there be an explosion? If there is, will it be positive, over all, to the party? Expectedly yes, if the party perfects its moves and stays surefooted on the process. Oshiomhole has the wits and the grits to realise this. Meanwhile, this is wishing the comrade chair a happy birthday amid the post-election victory celebrations.

Ojeifo contributed this piece via ojwonderngr@yahoo.com