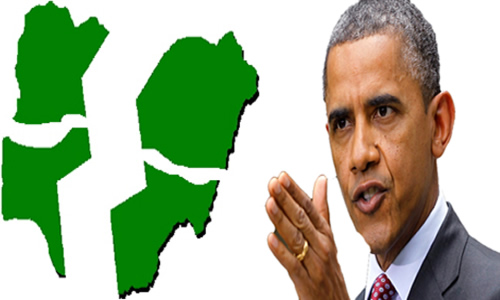 A couple of years ago, report had it that America predicted that Nigeria as an entity, would disintegrate by 2015. Of course, when the news came up, many people condemned America for choosing to be a prophet of doom for Nigeria, even as many others took the prediction as one of those American antics, of teasing the so-called third world or developing or under-developed countries.
One or two analysts have since denied, on behalf of America, that what it (America) said had nothing to do with prediction that Nigeria would break up in 2015.
As a matter of fact, what is in contention now is not only the issue of whether or not America predicted that Nigeria would disintegrate in 2015, but also the realities that are gradually manifesting in the nation’s political firmament.
It is becoming clearler that the concept of Boko Haram has been floated and or is been seen in some quarters as, and for the purpose of, rousing up the original agenda by some elements that are still in masquerade uniforms, to actualise the phantom American prediction.
Indeed, by hindsight, the identities of such elements, especially, those that have time immemorial, been looking for an excuse to expouse the break-up of Nigeria, are begining to show, even if slowly, in the horizon.
The identities are showing by the way they talk, by the way they behave and other mannerisms that have the semblance of the promoters of amagedon!
On the one side of the extreme, and perhaps a day-light, unapologetic agent of pull-Nigeria-down is the ex leader of the Niger Delta militants, Alhaji Asari Dokubo. He it was who called on his fellow tribesmen and women, a couple of weeks ago, to prepare for war with the North on some very incoherent and illitrate-infested reasons, using Boko Haram insurgents as alibi.
Asari Dokubo, who has always been enjoying wide publicity for all his adult infantile and juvenile empty threat even went as far as saying that he now had over 20 children and that he had trained any of them that has attained the age of 12 years on how to handle gun and engage in marcial fight…all these for the purpose of preparing for war with the people in the North.
He saw Boko Haram as another Hausa/Fulani feudal invasion of the South South that must be resisted at all costs. He even warned President Goodluck Jonathan (from his own side of the country) that he dare not decline to run for second-term in 2015.
At the other extreme is the Lamido of Adamawa who used his privileged membership of the National Conference to warn that he would pull his emirate from Nigeria if he is pushed to the wall.
And yet at the other extreme is a former Nigerian minister from South West, Femi Fani Kayode who has warned that it is either regional independence or bye bye to Nigeria (as an entity)
In deed, amidst these individuals’ ambitions are fears being expressed in many quarters, especially as the nation gets closer to 2015 and the issue of Boko Haram still looms large in the horizon, that the breaking up of Nigeria is becoming inevitable. This is even especially so as the South West and South South are currently agitating, through the National Conference, for regional independence.
Of course, even though, Lamido of Adamawa’s picture in the break-up of Nigeria nightmare is now in the public, the target of all the agitations for the break-up has been the North.
It is as if the mere break-up of Nigeria would suddenly send the North into political, economic and social oblivion and brighten the prosperity of the other parts.
It is unfortunate that the leadership has remained silence, hiding under the free speech in our own kind of warped democracy in the face of war and or break up drum being beating by those who ordinarily should have been behind bars. Those are they that have come out to show clearly that they are agents of break-up and or America’s phantom prediction.
Those of us that are on the side of a united, solid, peaceful and forward looking Nigeria, and I’m sure we are in majority, believe, like the late Sardauna of Sokoto, Sir Ahmadu Bello said, that we have more things that bind us together than the artificial, politically motivated ones that keep us asunder.
This, I believe, has nothing to do significantly, with the prosperity or otherwise of individual regions, states or councils, whether they are within the same geographical entity called Nigeria or without.