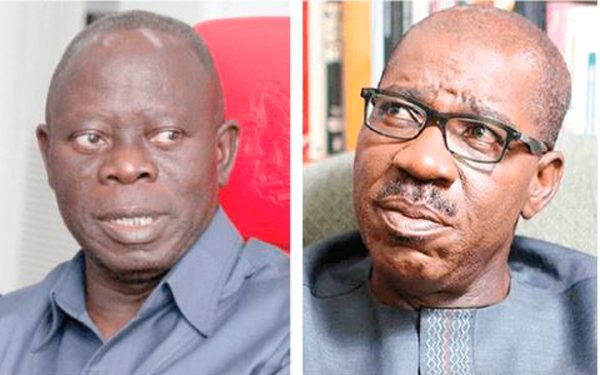 The interviews granted by a former governor of Edo State and National Chair of the All Progressives Congress (APC), Comrade Adams Oshiomhole, to select Television stations, on Friday, September 6, 2019, were historic because they enabled him respond to sundry questions and to counter the series of complex narratives woven round the Edo House of Assembly crisis by the other party.

Oshiomhole’s counter-narratives were downright frank, expansive – and he threw down the gauntlet, which Obaseki has yet to take up. He brought clarity to his actions. His grouse about Obaseki and his governance style was weighty and certainly, the weight of evidence is on Oshiomohle’s side. His claims against Obaseki and the supporting evidence have yet to be rebutted by the governor.

Obaseki’s silence is not golden and his dodgy directive to administration officials not to respond to Oshiomnhole’s claims doesn’t equate virtue in silence.  It is clearly indicative of his inability to fault Oshiomhole’s claims and counter narratives to the earlier narrative spun by him and his officials that political leaders in the state wanted him to share the state’s funds to them.

That was the scurrilous narrative marketed within and outside the state. It could only have taken a perceptive politician and marathoner to hold back for long before electing to dismantle the self-imposed culture of silence or to shed the self-restraining garb. The specific challenge to Obaseki by Oshiomhole couldn’t be simpler:  name the political leaders pressurising you to share the state’s funds to them.

Media professionals had attempted to insinuate Oshiomhole into the subject of the allegation, but in a riposte, he had clarified that Obaseki did not refer to a political leader; therefore, his generic reference to political leaders could not be construed to refer to him (Oshiomhole) as a leader. Oshiomhole also countered the narrative that he was controlling the governor, asserting that he nominated only a commissioner to the cabinet the governor dissolved in the wake of the crisis over the nocturnal and controversial inauguration of the state legislature.

Interestingly, Oshiomhole clarified that Frank Okiye, purportedly elected Speaker of the House, was not validly elected to the position.  Pressure continues to mount on Obaseki to issue a fresh proclamation for the proper inauguration of the State Assembly.  The governor chose a desperate course, after failing to produce many of his unpopular aspirants, as candidates in the 2019 national and state legislative elections.

Those who secured the tickets of the party through direct primary election were the popular aspirants that served in the administration of Oshiomhole with Obaseki and whom he related with as Oshiomhole’s boys. Oshiomhole had kept mum for so long. Many had said his quietude was not in pari-materia with his existential, essential activism and public space disposition. The expressive Iyamho-born politician, who deployed the singularity of his oratorical prowess in driving the electioneering of Obaseki in 2016, bided his time unlike Obaseki whose reactions had always been impulsively aggravating.

Left to Obaseki, he would circumvent leaders and members of the APC political family in the scheme of things. That was the philosophy that undergirded his quotidian disposition and perception of APC’s leaders in the state as being interested only in having government funds shared to them.

The quixotic demonisation of the APC leaders was Obaseki’s most ludicrous faux pas. How could the governor, who is the leader of the party in the state, fail so abysmally to understand the imperative of managing successes and expectations of members of his political family to consolidate on the structure?  Before his current predilection, Obaseki’s original plot was to retire a good number of the old political warhorses and build his own structure of budding politicians.  And, that was his howler: having inherited them, it behoves him to harvest their electoral assets and their nuisance values, going forward.

Nothing could have been simpler than that. Oshiomhole had already cut out Obaseki’s job for him by harnessing the potentialities of the politics and praxis of gladiators whom he galvanized behind his governorship candidature in 2016.  But the governor has complicated an otherwise simple relationship because of self-interest.  In fact, Obaseki had created the impression that he was not interested in politics but he is now so enamoured of governorship power, a disposition that is tantamount to the Chichidodo bird in Ayi Kwei Armah’s “The Beautiful Ones Are Not Yet Born”.  The Chichidodo bird hates feces, but loves the maggots therein.

Obaseki has been deploying the governorship power in its vast flourish to unsettle the APC family and raise the political temperature in the state. After his gambit to supplant the political structure in the APC collapsed, he is pathetically progressing in egregious blunders. To be sure, Obaseki had his own plans and calculations cleverly scripted and laid-out for implementation. But what he did not factor into his plan was the emergence of Oshiomhole as national chair of the APC.  Had that not happened, Obaseki’s plan was to rout Oshiomhole and his political structure.

Before the 2019 general election, Obaseki had, at the level of governance, desecrated the philosophy of continuity on which Oshiomhole premised and rationalised his choice as a successor.  He had curiously upended projects and programmes that he inherited from the Oshiomhole administration in which he played a strategic part as Chair of the Economic and Strategy Team. Two critical legacy projects: the five-star Central Hospital in Benin and the Edo Storm Water project- were unconscionably abandoned.

Blacklisting these two projects, among others, gifted opposition parties in the state grounds to continue to vilify Oshiomhole and disparage his administration. It was Obaseki’s plot to turn the people against Oshiomhole so that he could create a new popularity momentum around himself.  Whereas, what he needed to do was to facilitate the completion of the outstanding 25 percent component of the hospital project; he never did so.  Secondly, whereas, what he needed to do to maximize the functionality of the Storm Water Project was to de-silt the drainages so that flood water can flow through them seamlessly, he never did. Whereas, that is the essence of continuity in government, Obaseki scorned the philosophy in furtherance of his blinkered agenda.

Oshiomhole addressed these and other ancillary issues in his media interviews. First he said there was nothing personal about his disagreement with Obaseki as they remain friends – Comrade and Goddy – as the duo address each other. But the issues remain Obaseki’s constitutional infractions, lack of fidelity to the philosophy of continuity of Oshiomhole administration’s legacy projects and failure to constitute boards in order to empower party members and leaders across the 192 wards in the state – about a year to the end of the administration to validate the APC and the governor’s re-election.

These claims are very weighty and define the contention in the party? The weight and precision of the claims were such that Obaseki could not logically and reasonably discount them through the instrumentality of “a further and better affidavit”.  By heaping the coal of fire on Obaseki’s head, Oshiomhole had perceptibly redefined the shape, texture, context and content of the complex politicking and political narratives around the executive-induced APC crisis in Edo.

Obaseki’s decision to ignore Oshiomhole’s claims had largely reinforced the truth in them; otherwise, the governor could have addressed the claims so that the Edo people would be able to make their inferences.  But obviously overwhelmed by the magnitude of Oshiomhole’s claims, Obaseki would appear to have lost the little gravitas he hitherto had and has now continued to accentuate his clumsiness through a rash of discourteous acts towards Oshiomhole at public functions.

Some pictures have been trending on the social media showing how during exchanges of pleasantries, Obaseki would sit somewhat comfortably in his chair to respond to Oshiomhole’s greetings. In another of such pictures, where he acted the same way, his condescension was made more glaring by his Deputy, Philip Shaibu, who stood up right beside him, to pump hands with Oshiomhole.  Such disrespect only serves to confirm that all is not well between Comrade and Goddy. This is the essential weight of the matter.

Ojeifo contributed this piece via ojwonderngr@yahoo.com