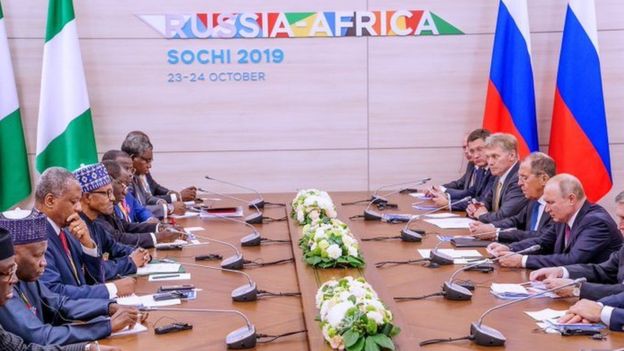 There is no doubt that Africa is gaining more and more global attention in recent times. Unlike its previous engagements with the rest of the world, the current wave of global attention being paid to the continent suggests the increasing pivotal role of Africa in the international system.

Though while the current global reconfiguration has witnessed tremendous shift towards the East, African nations, however, seem to have stood up seeking for mutually beneficial engagement with any interested partner from any part of the world to address their key existential challenges such as infrastructure deficits, unemployment, and insecurity.

However, Russia-Africa engagement is not new. Just like other world powers’ (Europe, America, and China) encounters with Africa, Russia had been on the continent for decades. Its engagement with Africa spanned the immediate post-colonial era. Though Russia showed little interest in the continent during the colonial period, the decolonization process of Africa in the early 1950s and the cold-war era created an opportunity for Russia (then part of the Soviet Union) to make significant inroads into the continent. Though, the collapse of the Soviet Union and the end of the cold war later resulted in its slow penetration into African.

As a matter of fact, Russia’s renewed interest in the African continent is predicated on the increasing influence of the emerging powers, coupled with the geopolitical struggle of Africa’s traditional friends to maintain their dominance on the continent. While Russia’s current step to return to the continent has generated considerable interest among the global actors, African Nations have, however, seen Russia’s move as an opportunity for the continent to bridge its developmental challenges.

After a long period of painstaking planning, the first-ever Russia-Africa Summit was successfully held in Sochi, Russia this year. Representatives of all 54 African nations, including over 40 heads of state and government participated in the summit. And about 100 deals and agreements worth over 12.5 billion dollars were signed between Russia and African leaders, ranging from military cooperation, Biotechnologies, agricultural development to oil and gas, and steel development, according to a communique. Chief of these deals that caught the attention of millions of observers around the world and received much encomiums at home (Nigeria), is the resuscitation of one of the continent’s most ambitious projects, Ajaokuta Steel complex, domiciled in Nigeria which had sucked over 8 billion dollars since its establishment yet remained derelict.

The project which began in 1979 was regarded as the bedrock of Nigeria’s industrialization. It was undertaken by a Russian company, Tyazhpromexport and said to be over 90% completed when the project was halted due to the Nigerian government’s failure to fund it coupled with the impact of the eventual collapse of the Soviet Union in 1991. The Steel complex was envisaged to have multiplier effects on all sectors of the Nigerian economy such as construction, agriculture, transport, among others. If completed and fully operational, experts say it can generate up to one million employment opportunities for the country. And Nigeria, as Africa’s largest economy with over 200 million populations, though facing a serious problem of unemployment is indeed, in dire need of such a life-changing project to tackle it.

While it is common knowledge that a number of companies from other countries had been engaged in the past but failed to bring to life this very important steel project on Africa’s most populous nation, it is gratifying that the Nigerian government has finally resolved to go back to the country that originally started it. Nigeria’s Minister of Mine and Steel Development, Olamilekan Adebite said recently, “we’ve come to the realization that it’s best to go back to those guys who did it initially.” This, of course, presents a promising opportunity for Russia to win the hearts of African nations, and prove to the world that its return to the continent would not pose any threat to other world powers but to establish mutually beneficial relationships with African nations. For this to be realised, President Putin must ensure that Ajaokuta steel deal and other important agreements reached at Sochi summit that can significantly have multiplier values are urgently transformed from mere memorandum of understandings to practical results.

Ajaokuta steel complex is an endearing project that had defied every attempt to make it operational. If Russia eventually injects life into the steel plant which can generate massive employment opportunities for the continent, it will demonstrate the practical impact of Russia’s intervention to one of the most surging populations on the continent. This will no doubt endear African nations to go further, close to Russia and might be on its way to becoming one of Africa’s most dependable partners in the near future.

Nevertheless, it’s obvious that Russia is yet to match U.S, Europe, China, India and even other smaller countries’ investments on the continent, but President Vladimir Putin can still build a strong relationship with the continent and even treble the current 20 billion dollars’ trade volume in the next five years. He only needs to take some cues from the current enduring cooperation between China and Africa which characterized by strong commitment, mutual respect, and practical results.

Because of the strategic role of Nigeria on the continent and the premium the country put on the Ajaokuta steel project and, being the most cheering deal that was signed at the Russia-Africa flagship summit between President Putin and his Nigerian counterpart Muhammadu Buhari, its success will indeed, determine the prospects of Russia-Africa cooperation.