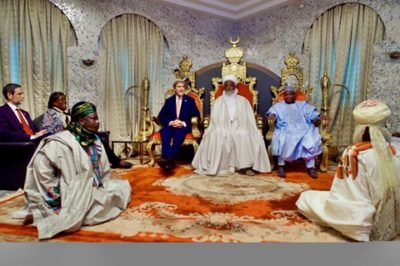 The metaphorical accuracy and symbiotic perspective of this historic presentation by Abbas Ibn Mohammed goes beyond a merely coincidental or ordinary fictitious storyline, from an ancient allegorical folktale, dramatising a voyeuristic interpretation of an imaginary plot, or, perhaps, could it be part of nature’s profoundly visionary and telepathically secret signs of coded language about the ominous future of the decaying Sokoto caliphate, under a decadent siege syndrome of an externally brainwashed and spiritually conscienceless generation of compromised heir?
Well, whatever may be the thematic thrusts, motives and contemprenous motivations of the many reasons of the unpalatable tragedies seemingly popping up their ugly heads, in a serially bizarre but rapidly suicidal succession in the contemporary domains of the Danfodian ancient Sokoto Caliphate at the moment, Abbas Ibn Mohmmed’s Graphic Analysis of Sheikh Usman Danfodio’s Past Dream Of a collapsing Caliphate, under a fictionally demobilized moral characterized tagged: “The 18th Sultan” is beyond simplistic, or ordinary accidental coincidences!
I believe that all serious and concerned Members of the Muslim Ummah within and outside Nigeria Will applaud Abbas Mohammed, for his timely response to the deadly virus that seems to be the undetected but ultimately organic killer disease that might be the cause of Islamic Disunity in Nigeria,which had been overshadowed by apparent indifference of hitherto , unperturbed engagements by virtually all Muslim Stakeholders!
I think, instead of indulging in ostrich-nagging debates and rancorous harangues about the visible threats of Sheik Usman Danfodio’s Ancient Promination which beastial reality is exposed by the incidental Political Solidarity between the Mala- Buni’s Northern Pro OBJ El-Rufai Cliques, Against the South-West Muslims, who have been discriminated and subdued by their own so called Yoruba elites,on the basis of religious beliefs, despite the undeniable facts and substative merits of the established historical testimony, that, without Muslim Support, “The Awoism which most of the Self-Serving and power mongering bigots from the South-west adlib to gain recognition and access to national political state, would have been in vain without Yoruba Muslim politicians, serving as (his, Pa Awolowo’s) indispensable pillars of unbendable support!
However, in conclusion, all I can say for now, to the Northern traitors and pro El-Rufai APC sponsored mobsters, is to refer them to the eloquent testimonies of Sheikh Usman Danfodio’s voyeoristic incitement.