Home OPINION COMMENTARY Asari Dokubo As Harbinger And Purveyor Of Terrorism In Nigerian, By Okoi... 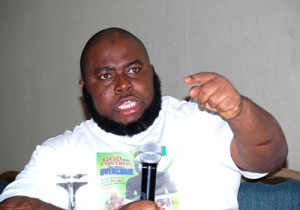 The self-appointed viral attack dog of President Good luck Jonathan, Alhaji Mujahid Asari Dokubo, is a Self-confessed terrorist and self-styled militant, who had previously taken up arms against the Federal Republic of Nigeria.

Certainly, Asari Dokubo is an adept terrorist who is one of the harbingers and purveyors of terrorism in Nigeria.

If Nigeria is not a country where vital State Institutions have virtually failed somebody like Asari Dokubo should be cooling his heels in imprisonment because he waged and levied War against his Father land under the guise of fighting for the emancipation of Niger-Delta.

Asari Dokubo received terrorism and insurgency training in the Republic of Libya for several years. This is not an allegation. Asari himself confessed to this fact.

He also confessed to the fact that he had received funding from the late leader of Libya , Muammar Al-Qaddafi running to millions of dollars to de stabilised the West African sub Region.

Muammar Al-Qaddafi was widely regarded in the Western and the United States of American diplomatic and security circles throughout the 1980s as the principal financier of international terrorism.

Qaddafi was alleged to have ordered the bombing of Pan American Flight 103 that exploded in December, 1988 over Lockerbie, Scotland with more than 200 men, women, children and crew on board.

Asari Dokubo is an utterly rambunctious and uncouth fellow. He uses the vile, acerbic and abusive language to address issues, so much so that sometimes it seems as if he is on the verge of insanity. He is compulsive liar.

Asari Dokubo has openly boasted that he would wage War against the Federal Republic of Nigeria in the event President Jonathan fails to win the 2015 Presidential election.

Asari Dokubo, ignorantly but boisterously and mischievous talk, as if only votes from the South/South matter and will win the presidential elections for President Jonathan.

He has forgotten that the entire country is the constituency of who desire to win the presidential seat. Asari Dokubo as a confessed terrorist has forgotten that democracy thrives on consensus, dialogue, persuasion and respect for the supreme will of the people. Democracy is anathema to terrorism, threats and intimidation.

Asari Dokubo is suffering from Buhariphobia! He has appointed himself as a knight to shoot down General Buhari through the use of scurrilous and insulting language; and leveling frivolous and spurious allegations against him.

Asari Dokubo’s latest allegation that General Buhari received funding in 2011 for his presidential campaign from the late Qaddafi, is spurious, distasteful and a figment of his fertile imagination.

However, every discerning observer know how Buhari’s campaign struggle in 2011 over paucity of funds so much so that General Buhari  was not able to campaign in some States of the country.

The allegation is bizarre and underscored the fact that Asari Dokubo is obsessed with and indeed paid to bring down General Buhari just to please President Jonathan.

I therefore urge Nigerians to take whatever comes out of the mouth of a treacherous fellow such as Asari Dokubo with a pinch of the salt.

I think that Asari Dokubo has undeniably gone berserk since the assassination attempt in Kaduna last week on General Buhari. Could it be a case of the Guilty is Afraid?

The Guilty Are Afraid is a 1957 thriller novel by the late American Novelist, James Hadley Chase. The novel is set against the background of a wealthy gang leader in the crime ridden city on the United States of America Pacific Coast, where the principal character, Lew Brandon looks for his murderer who disposed of his partner, Jack Sheppey.

Otherwise why would Asari Dokubo suggest that the assassination attempt on General Buhari by a suicidal bomber was staged managed by General Buhari because General Buhari was not known to be using an armoured plated vehicle before the incident!

How did Asari Dokubo know that General Buhari’s security was not formidable as it was before the incident?

Asari Dokubo needs to explain to the Police and other security agencies what he knows about General Buhari’s security prior to the dastardly attack on him. [myad]