Home OPINION COMMENTARY Between Buhari And Fayose, By Deen Adavize 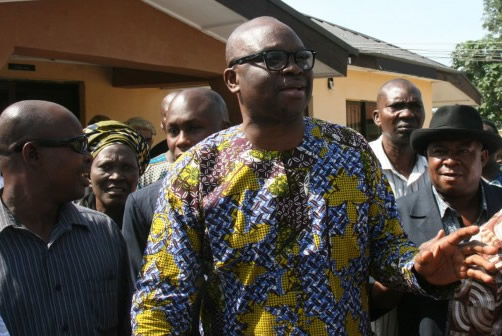 Since General Muhammadu Buhari emerged as Presidential candidate of All Progressives Congress (APC), two agents of the ruling Peoples Democratic Party (PDP), Femi Fani-Kayode and Governor Ayodele Fayose have particularly been out in the open. They have been on duty, trying to pull him, as a person, down, which, by the African standard, can be accepted as the dirty part of politicking. Indeed, in the African parlance, the easiest way to hear about the imagined or cooked-up bad deeds of your ancestors from those who did not even know where you were born, is for you to join politics. It is also in politics that a half-sane young man would insult a wise old man, old enough to be his father. And, like in war, all such things are regarded, to some extent, as fair!
It all began when the ruling Peoples Democratic Party (PDP) suddenly perceived the danger which the popularity of General Buhari could pose to its bloated ego against the background of the 2015 general elections. The party sent its agents, including the two Whitllow-infected mouthed ones, to dig into Buhari’s past records. They went into the archive and found that, in matters of integrity, honesty, incorruptibility, General Buhari is unbeatable. They began to search hard for at least, something to use in discrediting him.
That was when one of the two agents: the Director of media and publicity of the PDP Presidential Campaign Organisation, Fani-Kayode came up with a contrived certificate saga: the matter that did not crop up in the three previous attempts the General made to unseat, through ballot, the PDP Presidents, starting from the then President Olusegun Obasanjo.
Fani-Kayode madly pursued the course of the Buhari’s certificate and lack of it until he became exhausted even as Buhari kept gathering more momentum.
Just as the dust raised by Fani-Kayode designed agenda to pull Buhari down was settling in the charged political environment, the Ekiti state governor, Ayodele Fayose intensified his phobia about the ill-health of General Buhari which was originally raised by Fani-Kayode.
In the middle of the Fayose’s mad and desperation as he pursued a wish of ill-health for, and even death of, the APC Presidential candidate, he (Fayose) and his brother, Fani-Kayode contrived what was later discovered to be a fake or scammed medical certificate which purportedly showed that the General was actually sick. That could have been enough to land Fayose and Fani-Kayode in jail, but this is Nigeria, under PDP government!
While, as noted, Fani-Kayode has backed down on the issue of certificate, as he discovered that he had exhausted all the tricks he gathered, Fayose is now leading himself blindly into a big valley. He is indeed, turning the extreme case of insultive part of the African politics into lunatic display.
As a matter of fact, Fayose is manifesting an African proverb which says that a hand that frequently goes to the anus unnecessarily and or foolishly would one day, bring out stool (shit).
Fayose displayed his ridiculous ignorance recently when an announcement came that General Buhari was on his way to the UK for a short working visit.
Fayose went to town, as if he was Buhari’s medical doctor or consultant, to tell the world, through, of course, his gullible allies in the media, that the General was actually flown out for medical treatment.
Even when, a few days later, pictures of Buhari personally having a meeting with the former Prime Minister, Tony Blair; of him being interviewed by a Television reporter and of him addressing Nigerian Professionals in London, Fayose still went ahead to dispute the pictures. He said at one time that the pictures were taken in 2013, at another time that the one in which Buhari was being interviewed by a reporter was taken at the Nicon Noga Hilton Hotel in Abuja, Nigeria.
As a matter of fact, when all evidences showed that Buhari was actually in London, the busy-body governor now went spiritual: he asked General Buhari to swear with the Holy Qur’an that he did not visit hospital in London.
Fayose has been so mad at pulling Buhari down that he has not only landed in total confusion, but has now earned the anger of his fellow Yoruba people who see him as a disgrace to the society.
Indeed, the stage at which Fayose is now operating points to only serious matter of insanity. If there is anybody who is sick all over and who needs special medical attention from special hospital overseas, it is Governor Ayodele Fayose. His aides should be of favour to him by assisting to package him into the next available flight to God knows where before it is too late. [myad]