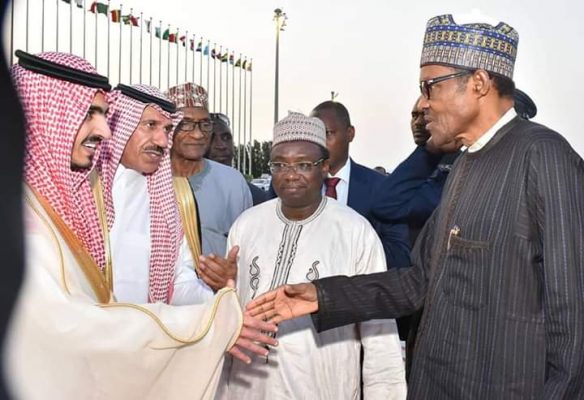 On Friday, President Muhammadu Buhari delivered the address of 16 African nations who are members of Organization of Islamic Cooperation (OIC), making it the third time a Nigerian leader will speak at the OIC. Late President of Nigeria, Alhaji Umaru Yar’Adua and his successor, Dr Good luck Jonathan had attended previous meetings.

The just concluded 2019 meeting held in Makka, Saudi Arabia, is significant as it marked the 50th anniversary of the organization.

As with most issues in Nigeria, there will always be individuals and groups who will disagree with the President. For some, there are good reasons for doing this while for others it is like sports; they enjoy going the opposite direction. And for another set, it is personal. No matter what President Buhari does, they will never be pleased with him.

When the President decided to attend the OIC meeting, he knew some people will raise dust. But guided by the overall national interest, which always governs his actions, he preferred not to worry about the storms. The criticisms of his attendance by some, including cultural organization, Ohaeneze and Christian Association of Nigeria are not new or unexpected. For those who know President Buhari, these tantrums don’t make him angry, in the full understanding that when the critics take time to read or see the outcomes, they too will be glad that the decision taken to be present at the key strategic gathering.

Interestingly, the major takeaways from this meeting were concerns expressed daily by Church leaders and Imams. The issues deal directly with safety, peace and prosperity of the nation and its citizens.

It is noteworthy that President Buhari, leading other African leaders, got key support for many issues of concern or interest to Nigeria and African continent at the meeting. Top on the list is strong condemnation of terrorist acts. The meeting agreed that fighting terrorism is a major priority, resolving to work together to “prevent and suppress terrorist acts through strong international solidarity and cooperation in full recognition of the UN’s central role in that regard.”

In the specific case of countries of Lake Chad Basin facing “grave security challenges and vicious insurgency arising from Boko Haram terrorism and insurgency,” members agreed to increase humanitarian aid. To this end, the regional humanitarian office of the OIC in Niamey, Niger Republic will be upgraded to a Regional Representative Mission to “mobilize political commitment and undertake development and humanitarian activities.”

President Buhari equally got reassuring support for recharging of Chad Basin, a goal he has consistently promoted on the global stage. The Lake had shrunk to 10 per cent of its size due to effects of climate change, with dire economic consequences for many. The OIC members assured that they will support the ongoing project of recharging the lake, in view of the socioeconomic benefits to neighbouring countries.

Reducing poverty and hunger was also discussed extensively. Members saw the need, and made strong commitments to assisting less privileged member-countries to tackle poverty and hunger. To this effect, members that had not pledged to the Islamic Solidarity Fund for Development were asked to do so and those that pledged contributions deemed to be low in view of current reality were requested to increase.

The solidarity fund aims to reduce poverty among member-states by “promoting pro-poor development and human development.” The Islamic Organisation for Food Security was charged to address challenges of agriculture, rural development and food insecurity. Soon, there will be a framework for development of OIC renewable energy in terms of both access and distribution.

Another important achievement by the African group in particular was by way of establishing an economic assistance program for them and other less privileged OIC countries to cope with economic development challenges. In area of finance, development and trade, the meeting commended the Islamic Development, IDB, for the model it operates that promotes competitive development among members, developing infrastructure and promoting the private sector.

Going forward, OIC members agreed to boost trade with a target of 25 per cent trade exchange. To push this, a frame work for Trade Preferential System will be worked out.

Another vision of President Buhari which got attention and support at the 14th Summit in Makkah is on environment. Members will promote environmental education because it will help countries to deal with degradation. The meeting agreed that this will also raise health standards.

The OIC meeting encouraged members to take necessary steps in promoting science, technology and innovation “with the aim of addressing global challenges linked to issues of environment, climate change, human health, energy sources and water resources.” The summit agreed to hold a second science and technology summit in 2020 at Uzbekistan.

At the conclusion of the meeting, there was a resolution to support the “G5” Sahel countries (Niger, Chad, Mali, Burkina Faso and Mauritania, established in 2014) in their efforts to fight terrorism and ensure development.

Nigeria, a country with bubbling and versatile cultural heritage, stands to gain from measures that will support cinematic productions, including a planned launching of an OIC film festival. In this regard, the leaders commended the Secretariat for the initiative of the OIC Film Award for Peace and Co-existence which debuted in February this year at the African Film and TV Festival at Ouagadougou, Mali.

The leaders accepted a recommendation by the Council of Foreign Ministers for the setting up of a unit for youth issues that will focus mainly on their empowerment.

There was a landmark adoption of a plan for women advancement with implementation mechanisms. There will be an OIC Women Consultative Council that would, among other issues, seek to strengthen the marriage institution, and discourage marriage of underage girls.

The robust, and well attended meeting, touched economic and social issues affecting members, relying on the strength of collective efforts to find immediate and lasting solutions. The meeting agreed to come together and end terrorism; support members that are behind in economy and development; empowerment of youths through knowledge and entrepreneurship, and advance the cause of women.

Other significant gains include discouraging marriage of underage girls; increasing trade and investment; promoting science, technology and innovation; promoting culture; financing development and preserving the marriage institution. Arresting climate change, sustaining advocacy on the issue of Palestine, and working together for peace, security and co-existence were also addressed.

Given their antecedents and predispositions, critics weren’t prepared for these laudable outcomes. With the facts now made available, they should withdraw accusing finger and accept the President’s participation as important for the country, and the continent. It is not late to reverse their merciless criticism. Surely, the outcomes have justified the journey in so many ways, and time will tell.