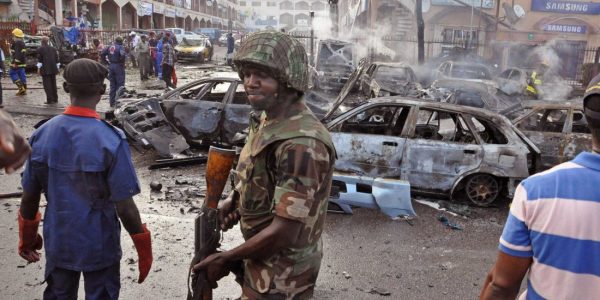 This is not the first time a non Muslim/Fulani will be caught in acts of terrorism
Mr. John Alaku Akpavan, the man
arrested in attempting to bomb Radio House Abuja on 5th June 2011 was a christian.
Lydia Joseph (the failed bomber of St. John Catholic Cathedral) of Bauchi State who attempted to bomb a church on September 12, 2011 was a christian.
Augustine Effiong Akwa Ibom indigene carried out the April 29th 2012 BUK
bomb attack is a christian.
Emmanuel King arrested in an attempt to bomb the Redeemed Christian Church of God (RCCG) in Yenagoa, the Bayelsa State capital, while camouflaged in Islamic attire on December 28, 2011 was a Christian
Igbo traders that gunned down a dozen fellow Igbo businessmen of the same non-Islamic faith inside the Christ Apostolic Church, in Adamawa State on Friday January 6,
2012 all claimed to be Christians
Samson Mangai who was arrested in Plateau state attempting to bomb a church was a christian..
Madam Ruth, who attempted to bomb the ECWA church, Kalari Kaltungo, in Gombe State on 12 Mar 2012  was a Christian.
Case of the arrest of about eight
Christians in Bauchi in an attempt to blast the COCIN church on Sunday, February 26, 2012.
Case of the Christian bomber lynched while escaping after blasting the COCIN Church in Jos on Sunday, February 26, 2012.
Alex Danladi involved in COCIN HQ bombing was lynched by worshipers. He was a church member disguised in military
uniform.
Jonathan Gyanet, police officer was arrested while attempting to bomb ERCC church in Akwanga Nasarawa state on Apri 20 2014 was also a Christian.
Ogbeche the Nyanya bombing mastermind was a Christian son of a retired army colonel.
Those arrested so for for providing logistics such as transports, food, ammunition to BH are Christians of a particular ethnic group in Nigeria.
And many more, including Nathaniel Samuel who attempted to bomb living faith Church in Kaduna on 02 February 2020. And he is not a Muslim..
May God continue to expose our common enemies trying to destabilizes our beloved country Nigeria.