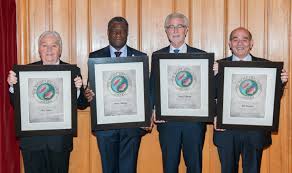 We, the recipients of the Right Livelihood Award, popularly known as the “Alternative Nobel Prize,” strongly condemn the killing of hundreds of children and innocent civilians in Gaza by the Israeli Defence Forces, the indiscriminate firing of rockets by Hamas against Israeli civilians, and we mourn the continued suffering of Gaza’s inhabitants.

Gaza faces shortages of water and electricity supply, of hospitals, physicians and medicine, while bombs and bullets kill and injure both civilian people and health workers in a spiral of violence and hopelessness. Around 24 % of all those who have lost their lives in Gaza, as a result of Israeli bombing and military invasion, are children.

Nevertheless, the responsibility for such deaths lies not only with the joint and manifold accountabilities of Israel’s soldiers, Hamas’ fighters and their governments. Other governments are responsible either directly or indirectly through the transfer of weapons, military advice and silence. Such countries and  the United Nations seem not to have learned from the past. Meanwhile, even as the violence grows rapidly in Gaza, negotiations move at an incredibly slow pace and are hindered by the vested interests of countries that don’t face any bloodshed in this conflict. Dialogue and negotiations cannot be replaced by the use of military force. Revenge solely produces revenge and bloodshed solely produces more bloodshed.

Nobody will forget the recent scenes of broken school books in the streets of Gaza and the broken lives of the children who used them. Their dead bodies splattered near their books, which are never to be used again, paint a tragic picture of unparalleled cruelty. Nobody has the right to end their lives nor to threaten the lives of those children that still survive. They are also our children.

In this context we strongly support the outstanding and courageous work, determination and perseverance – amidst the thunder of bombs – of our fellow recipient Raji Sourani (RLA 2013, Palestine) and his colleagues at the Palestinian Centre for Human Rights in Gaza, who are denouncing the killings of innocent civilians and the continuity of a dirty non-declared war being waged against the principles of international humanitarian law. We also want to express our deepest admiration for the work of Israeli peace organisations such as Gush Shalom (RLA 2001), and the incredible work of all medical personnel operating in Gaza right now continuously highlighted by our friends at Physicians For Human Rights-Israel (RLA 2010), who continue to hold up the torch of humanity despite being exposed to the inhumane machines of war.

As recipients of the Right Livelihood Award we urge the United Nations, the European Union and regional bodies, such as the Arab League and the Organization of American States, and countries from all over the world to join their voices, to condemn these unacceptable violations of human rights, to request an immediate ceasefire, lifting of the blockade of Gaza and to ask for the beginning of new peace talks. And to also halt all actions that perpetuate this conflict, hinder a peace settlement and supply the warring parties with arms. If we don’t act urgently, more children and innocent people will be killed in the following days, in the following hours, in the following minutes, in the following seconds.

Signatories to this statement, as of Friday July 25 2014, 11 am CET, are 46 Right Livelihood Award Laureates from 32 countries: (We will continue to update the list on our website, www.rightlivelihood.org)