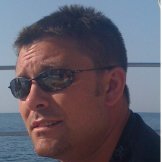 Nicholas Hanlon is Chief Africa Analyst at the Washington based Center for Security Policy for the WASHINGTON Times a Republican leaning Newspaper. [myad]