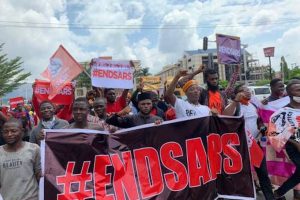 For some days now, the Country has been in turmoil, with youths’ seamless peaceful protests against the excesses of the SARS operatives snowballing into crisis. The initial protest caught the interest and attention of many Nigerians, including the President who insisted that the youths should be allowed to exercise their rights within the democratic norms.

Two weeks into the protests so many gains were made and achievements ongoing with the immediate dissolution of SARS as demanded by the youths, even as state governors swung into action by setting up board of enquires to investigate the level of brutalities by the various State SARS.

At Federal level, the Inspector General of Police recommended over 35 erstwhile SARS members found wanting for dismissal and subsequent prosecution. While among other demands were being considered by the President, the situation suddenly changed from mere protests to revolution, separatism and arson of serious magnitude.

The black Tuesday happened unabated in Lagos, the epic-entre of the protests with loss of lives and wanton destructions of both public and private properties beyond imagination.

The change from peaceful protest to violence, with some unfulfilled selfish politicians infiltrating the rank and file of the innocent youths to course mayhem, seeking for cession and change of government.

The machinations of evil doers are so visible in the reportage of events and occurrences of the protests, with old videos of uploaded in the social media to cause disaffection and hatred amongst the citizenry. They forgot that war is no tea party and no friend to anybody, tribe, political party or religious body; it consumes souls, irrespective of age and status.

See also:  Islamophobia: Pantami And Hypocrisy Of His Detractors, By Fredrick Nwabufo

It is important to sound a word of caution here, and to remind the general public on the need to observe modesty, and to abstain from distributing and circulating false information that is capable of igniting war and disaffection on our corporate existence.

Protest of this nature ought to have coordinated leader, who can provide leadership as and when due for further engagement of authority on negotiation table.

Both prospective protesters and government should know their limits and to allow the rights of other citizens within the human rights framework to subsist.

Governance is collaboration of all tiers of government like the legislature, judiciary and the executive. They are called upon to wake up to their duties by building stronger institutions that would outlived them in making Nigeria great again.

With all efforts the federal government is making, if both the state and local governments are up to their responsibilities, the poverty level will be abated. It is a fact that poverty and hunger are the propellers of anger and agitations.

Nasir wrote in from Abuja.