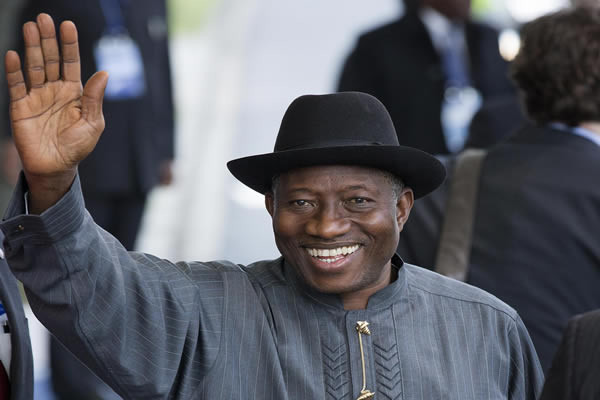 President Goodluck Jonathan, who is seeking for a second-term on the platform of Peoples Democratic Party (PDP) in the March 28 elections had made some famous remarks since he was first voted into power in 2011.
Here are a few of such remarks reproduced:

1.CNN has said our Economy is growing…The best Economists are at the World Bank. Now you have all these Nigerian Economists talking nonsense. Do they know better than CNN or World Bank..?
2. Nigeria is not poor. Come and see the amount of private jets Nigerians parked at Kenya Airport when we went to Nairobi for Conference. Kenyans were just looking at us with envy. How can you say Nigerians are poor.
3. Nigerians need jobs. Vote for me and I will create unemployment.
4′. We are giving special Scholarships to our First Class Graduates. In ten years time they are going to take us to the Moon.
5. How can you just say $20 billion is missing. If that kind of money is missing, the Americans will know. They know everything.
6. Corruption is not stealing. If you put yam where a goat is the goat will eat the yam
7. If you go to Lagos and shout “ole ole” they will stone you well well.. But if you shout “corruption” people will just be looking at you…
8.Why should I declare my assets? I don’t give a damn..!
9. People are just raising false alarm… How can 200 children go missing just like that? It is our enemies trying to cause confusion. But we are investigating the matter…
10. We are going to rebuild the Chibok school and we are going to build high fences round the school to protect them next time. Yes, Yes
11. People keep saying why don’t we go to Chibok..why don’t we go to Chibok.. Aaah we can’t go to Chibok just like that. The Boko Haram people will fire at us…
12. This Abuja bombing is not by MEND. We know it is by Boko Haram. They are everywhere. Boko Haram is even in my Government.
13. Boko Haram are our siblings. You can’t set the Army to go and wipe out your family.
13. Mend tried to kill me. They came to bomb me in Abuja. That is why we jailed Henry Okah in South Africa.
14. I did not plan the Election postponement even my Service Chiefs did not consult me.
15. If I knew Election was going to be postponed why will I waste my time and Federal Government money to go and campaign in Bayelsa.
16. I am the Commander in Chief of the Armed Forces. You don’t expect me to go and be fighting in Sambisa forest. People jus talk anyhow…
17. We are going to buy Guns and give good Pensions to our Brave Soldiers so that when they are killed their families will not suffer.
18. Some people just call themselves Statesman for nothing. They jump about and talk like motor park touts.
19. After God and my Parents the third person I thank most for my life is President Olusegun Obasanjo.
20. I want to apologise to the people of Rivers State for not bringing any Projects here…It is because I don’t want people to say I am doing favouritism. Vote for me and in the next four years you will see my hand…
21. I am the sitting President…If there is any trouble it is me that the United Nations secretary General calls… Everything is on my head…
22. May 29 Swearing-in Day is sacrosanct. Definitely a new President will be sworn in on that day… [myad]