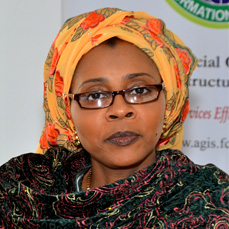 Hajiya Jamila Tangazah has come to epitomize hard work full of energy as the pilot of the Abuja Geographic and information System (AGIS). As a matter of fact, since she assumed duties at the AGIS office, Jamila has shown a leadership that has turned out to be an example to those who believe in hard work, efficiency, transparency and self discipline.
Those who are working with her would confess that AGIS has been able to deliver on its mandate as a result of the quality of her leadership.
The easy going woman of honesty has, within her short stay at AGIS, ensured that things are getting better in terms of revenue which the institution was able to collect at the end of 2014 as against what was collected in 2013.
Though a lot might have been written about Jamila and her laudable achievements, but I believe that the best is yet to come out from her.
Anyone who does an overview of the development at AGIS will conclude that it has indeed achieved a lot within the past two years or so, of Jamila’s leadership, made possible by the support she received from Senator Bala Mohammed who is the FCTA Minister.
The pro-active measures Jamila introduced like double checking of C of Os and data base have yielded fruit as AGIS has been able to collect a lot of revenue apart from drastically reducing the incidence of fraud and other nefarious activities of land racketeers.
It is on record that during her tenure at the AGIS, she received commendations from the management of the FCTA/FCDA and from her colleagues at the PPP and other public and private institutions.
Jamila has evidently transformed the land information management through investment in modern technology at AGIS
Some sophisticated facilities that have been installed at AGIS have made it to be a centre of excellent in geographic information system AGIS.
It is on record that the recent systems upgrade has made it possible for the production of C of O to be done within ten minutes. AGIS is now in a position to produce an average of 50-100 C of Os every week, besides other areas of service improvement.
Jamila who could also be described as a change agent is a combination of brain and beauty. Apart from being a workaholic public servant, she started her Journalism job as a producer with the British broadcasting corporation (BBC) London and rose through the ranks to the position of a senior executive. She did her fellowship at the Oxford University. From BBC Jamila was appointed the FCT Ministers SSA Media before her present appointment as Director AGIS. [myad]