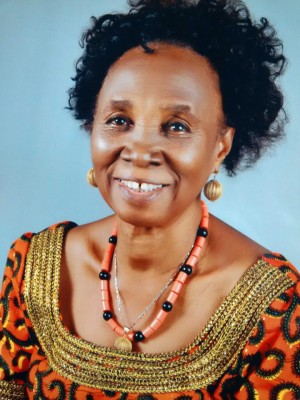 The baby that came to be known and called Elder Mrs Josephine Iheuwashiachi Ukaegbu was born on June 1, 1934 to the family of Mr. Christian and Mrs Grace Chikeka of Umuogbamkpa kindred, Ishiuzo Egbu, in Imo State. Her birth brought joy to her family, as the pretty face carried the hope and aspiration of a family for the future.

The then little beautiful damsel whose heart was fixed on broadening her educational career suffered a temporal setback when she was plagued with a strange ailment that almost paralysed her. After a miraculous healing of the strange sickness, she went to a commercial school and also trained briefly as a nurse. She was later to be married to her heartthrob, Mr Edinburgh Onyejelam Ukaegbu of Umukoto Umudibia Nekede in 1965.

With education still her attraction, she went ahead to graduate as a teacher from the Advanced Teachers Institute Zaria, Kaduna State, in 1976.

The young Josephine, who worked briefly as a Secretary Typist with the Native Authority Ukwu Orji in Imo State, also had a stint as an Auxiliary Nurse in Surulere, Lagos. A multi-talented damsel, Mama was engaged in several endeavours in order to provide multiple streams of income for the family that was her entire pre-occupation and support to the man who stood by her, while the strange ailment plagued her.

Apart from having a catering shop in Soba near Zaria, she worked as a teacher in Kaduna state for several years, and thereafter retired to full-time trading to support her family.

To Mama, there was no place for “impossibility,” as she was enmeshed in a philosophy of never giving up despite the odds. She dreamed of a better tomorrow where her children would live far better and improved life. With this all-conquering spirit for a better future, she conquered stigma and vicissitudes of life and later became the fulcrum of the family.

Mama Josephine was an epitome of beauty, but she never allowed such gets into her head. She was a strict disciplinarian who taught her kids to imbibe the dignity of labour. She taught her children to be hopeful of a better future and be far from defeatism.

Apart from being a lover of peace, she was an advocate of family unity and would spare no effort to ensure peace among her children she guarded so jealously. To her, the essence of Christianity is attaining peace with oneself and others. In collective unity, she saw the attainment of individual peace.

Mama loved God so much and became born again in 1988. She was a member of the Assemblies of God Church, Umudibia. Mama remained with the Assemblies of God Church for several years and in 2003 joined her children in Abuja who are strong members of Living Faith Church Worldwide. She served God faithfully and did WOFBI Bible Course. She chose the path of righteousness and encouraged her children to be committed to the service of God.

According to her eldest son, Kingdom Sam Ukaegbu, “Mama conquered stigma and vicissitudes of life and triumphed over them. She wasn’t resentful towards anyone, wasn’t quarrelsome, and didn’t show bitterness to anyone. She epitomized the word of God that says, ‘follow peace with all men’.

Pastor Godsaid, her youngest son, is deeply appreciative of her guiding principles, “Mum thank you so much for seeing into my future and struggled to make sure I had a good and God-fearing educational background you put me through one of the best Seminary Secondary schools. The kingdom service I enjoy today was due to your unflinching love, care and constant motherly advice and sacrificial effort. Oh Mum, your demise has created a vacuum in me.

“Who then can now answer my midnight calls? Who can now call me severally just in one day. Who can tolerate me? Who will I cut her nails and talk heart to heart with so freely and without reservation?”

Considering the life of probity and hard work Mama lived, those who came in contact with her felt her essence of living that was hinged on unquenchable zeal for excellence.

As she begins her final journey with a service of songs on May 7 at her Umukoto Umudibia in Nekede, the funeral service is to hold at the Living Faith Church Owerri on May 8 at 10am, while internment will hold at Ukaegbu 2nd Compound at Nekede.

Mama Josephine’s life reminds us of ‘Psalm of Life’ by Henry Wadsworth Longfellow, who said, “Life of great men all reminds us that we can live our lives sublime and departing leave behind us footprints on the sands of time.”Mama left the surly bounds of this earth on April 1, 2015 to meet her maker whom she adored, cherished and served to her last moments.

She is survived by four children, Mr. Kingdom Sam, Mrs. Sheila Dumto, Mrs. Mira Enyia and Pastor Godsaid. Also left behind to celebrate her life of excellence are her two brothers and 11 grand children.

Reef, a media practitioner based in Abuja, can be reached on simonreef927@gmail.co. [myad]