Home OPINION COMMENTARY Mandela Did It, Jonathan Ruined It, By Adeyemi Suleman 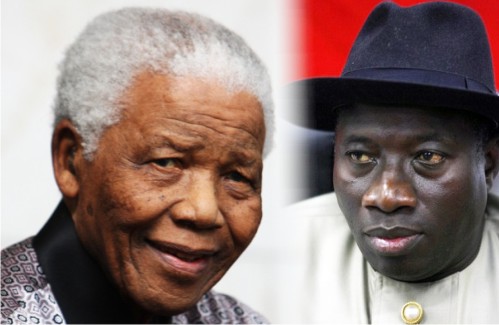 Prior to the formal announcement of President Goodluck Jonathan to contest for another term in office, Nigerians were daily inundated with the messages sponsored by the Transformation Agenda of Nigeria. Our sensibilities were regularly assaulted by the propaganda of how some revolutionary leaders in the world had done great sacrifices to rescue and reform their respective countries, and how Jonathan too is ‘doing’ same in Nigeria.
The promo usually opens with how Martin Luther King (Jnr.) did it in the US, fighting for the human rights of the Americans, especially the blacks; how Prime Minister Lee Kuan Yew of Singapore turned around the fortunes of his country to become a first-world nation; how legendary Nelson Mandela helped South Africa to tackle apartheid and how President Barack Obama is doing ‘it’ in the US at the moment. In the message, TAN informed Nigerians of how President Goodluck Jonathan is ‘doing it’ here in Nigeria and urged him to ‘keep doing it.’
Certainly, those leaders being compared to President Jonathan sacrificed immensely and achieved remarkable strides for their respective countries and their popularity and feats endeared them to their people. They became enigmatic with their feats and instantly became heroes even before their demise. They never asked their countrymen to like them, yet they were worshipped.
To many Nigerians, Jonathan’s record since he became President, when placed side by side with those leaders, cannot match them. In my estimation of the majority, the comparison is a joke taken too far. Except for unrepentant tribalists, religious bigots, chronic pessimists and sycophants, including those ignorant of history and or with low intellectual capacity to comprehend the issue at hand, the TAN submissions are laughable. Of specific interest here is Nigeria’s recent let-down of the Palestinian people through its infamous and callous abstention from the UN vote on a draft resolution for Palestinian statehood. History has shown how the late anti-apartheid icon, Nelson Mandela stood solidly behind the Palestinians in their quest for freedom from Israeli occupation which has been characterised by killings, settlement activities and all sorts of inhumanities. In the face of Western criticism and despite being labelled a terrorist, Mandela remained undaunted. In 1999, the anti-Apartheid hero toured the Middle East, visiting Palestine. In Gaza, he closely identified the South African struggle for freedom with the Palestinian struggle. However, unlike Mandela who did it for Palestine till his death, President Goodluck Jonathan bungled it on Tuesday, December 30, 2014 at the most crucial time.
The Palestinians only needed a vote at the UN from Nigeria to attain statehood. Rather than ride on the same pedestal with Mandela, Jonathan decided to align with the forces in Israel and the US. He simply equated abstention to neutrality. Jonathan’s action marked a pivotal shift in Nigeria’s foreign policy, where the country always voted in favour of Palestine and had always thrown its weight behind a two-state solution to the Israeli-Palestinian conflict, even before the recent realisation and support of the EU and all other Super Powers except US. Nigeria’s vote would have ended Israeli occupation of Palestinian territories of the West Bank, East Jerusalem and the Gaza Strip by 2017. The UN resolution, sponsored by Jordan, had called for fresh talks based on territorial lines that existed before Israel’s occupation of the territories in 1967, and was the culmination of three months of campaigning by the Palestinians at the UN and had the backing of Arab states. The Palestinians required nine votes from 15 permanent and non-permanent members of the UN Security Council. The US and Australia voted against the resolution, while Russia, China, France,
Luxembourg, Jordan, Argentina, Chile and Chad voted in favour. Nigeria, Britain, South Korea, Rwanda and Lithuania abstained. Nigeria’s abstention did the damage. The position to say the least was a disappointment to the Palestinians who had banked on the robust historic foreign policy of Nigeria that never queued behind iniquity, support injustice and identified with the aspiration of the oppressed peoples and nations of the South-South, Asia and Pacific nations. The Ambassador of the State of Palestine to Nigeria, Dr. Montaser Abu-Zeid who could not hide his shock, told the media that he received the assurances of Nigeria’s foreign ministry officials and had transmitted same to the Palestinian president and foreign minister. While the anguish continued in Palestine and the rest of the world, the Israelis and their US backers were raining praises on Jonathan. The scenario presented by this event is that Mandela did it, but it seemed rather than doing it, President Jonathan bungled it. [myad]

See also:  I Dont Mind Being A One-Man Minority - Soludo In His Controversial Article To Ndigbo